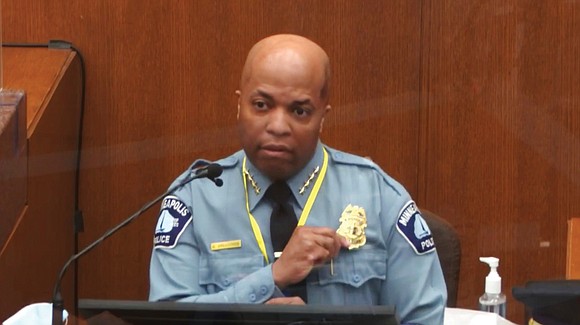 n this image from video, Minneapolis Police Chief Medaria Arradondo testifies Monday about the knee restraint used by former officer Derek Chauvin in the May 25 arrest and killing of George Floyd. Photo from Court TV via AP, Pool

MINNEAPOLIS - Minneapolis Police Chief Medaria Arradondo joined in condemning the actions of Derek Chauvin during the second week of the trial of the former officer charged with murdering George Floyd while he was in custody.

Breaking the traditional “blue wall of silence,” Chief Arradondo provided devastating testimony that Mr. Chauvin’s act of pressing his knee on Mr. Floyd’s neck was unjustified and far outside the bounds of acceptable action for officers of his department after a suspect has been arrested and brought under control.

“To continue to apply that level of force to a person proned out, handcuffed behind their back — that in no way, shape or form is anything that is by policy,” Chief Arradondo said in court Monday. “It is not part of our training. And it is certainly not part of our ethics or our values.”

Mr. Chauvin is charged with second degree murder, third degree murder and manslaughter in Mr. Floyd’s death, which triggered racial justice protests in Richmond and cities across the country and put police practices and criminal justice reform on the front burner of the country’s agenda.

If convicted of the top charge, Mr. Chauvin could spend 40 years in prison.

Along with Chief Arradondo, the prosecution also presented testimony from a police use of force expert to bolster the case that Mr. Chauvin knew or should have known he was killing Mr. Floyd.

In his testimony, Los Angeles Police Sgt. Jody Stiger said that it was clear to him that Mr. Chauvin used excessive force on Mr. Floyd after he was taken in custody for allegedly using a possible counterfeit $20 bill to buy items at a convenience store.

Sgt. Stiger, whose testimony began Monday and continued Tuesday, said the officers were justified in using force while Mr. Floyd resisted their efforts to put him in a squad car. But once Mr. Floyd was on the ground and stopped resisting, the officers “should have slowed down or stopped their force as well,” he testified.

Based on his review of video evidence, Sgt. Stiger testified that Mr. Chauvin had his knee on Mr. Floyd’s neck — and was bearing down with most of his weight — the entire time he lay face down with his hands cuffed behind his back.