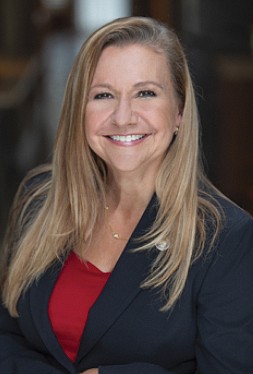 A firebrand conservative state senator from Chesterfield County seeking the Republican nomination for governor filed a federal lawsuit Monday that seeks to undo her legislative colleagues’ recent decision to censure her for an alleged “pattern of unacceptable conduct.”

In a bipartisan vote last week, the Virginia Senate approved a measure rebuking GOP Sen. Amanda Chase over a series of incendiary incidents during her tenure, including remarks in which she seemed to voice support for those who participated in storming the U.S. Capitol last month. The decision to pass the censure resolution followed a long debate that featured scathing criticisms of Sen. Chase from both Democrats and Republicans.

In the lawsuit, Sen. Chase argues that she is being “singled out and selectively penalized for taking unpopular political positions.”

Sen. Chase alleges that she has suffered “public embarrassment, humiliation, mental anguish and loss of seniority” because of the censure and has been “negatively impacted” in her candidacy for higher office.

Democratic Sen. John Bell of Loudoun County, who sponsored the censure resolution, said while Sen. Chase has the right to seek remedy through a lawsuit, he is confident the court will deny her requests.

Sen. Chase is one of many state lawmakers from around the country who attended the Jan. 6 rally in Washington held by former President Trump shortly before the attack on the U.S. Capitol. While she spoke at the rally, she said she was not part of the mob that later stormed the building.

But last month, Sen. Chase used a floor speech to defend Ashli Babbitt, a woman who was fatally shot by U.S. Capitol Police as she tried to push her way through a broken door into a secure area of the U.S. Capitol during the insurrection.

“We remember Ashli and the three who died of medical emergencies and the Capitol Police officer who died during the chaos at the Capitol. These were not rioters and looters, these were patriots who love their country and do not want to see our great republic turned into a socialist country,” Sen. Chase said at the time, sparking an outrage.

She later said that when she referred to “patriots,” she meant people she was standing with at the nonviolent rally “before all the mayhem took place,” including veterans and police officers.

Sen. Chase previously had called for martial law to overturn the results of the 2020 presidential election. She repeated former President Trump’s baseless claims of election fraud, and lost access to her Facebook account after falsely blaming leftist activists for the Capitol insurrection.

Members of the Virginia Legislative Black Caucus issued a statement last month saying they “strongly support” the Senate moving forward with the censure resolution against Sen. Chase “for her role in fomenting violent insurrection against our democracy.”

They said Sen. Chase “often expresses white nationalist talking points,” and they blasted her for what they called her “senseless plans” to file a resolution to censure Sen. L. Louise Lucas of Portsmouth, the first woman and first African-American president pro tempore of the state Senate, for her involvement in a demonstration last June in Portsmouth over a Confederate monument. They called Sen. Chase’s plan a “distraction” from her own participation in the Washington rally.

The censure resolution also took aim at Sen. Chase for calling the Democratic Party of Virginia “racist to its core,” for berating a Virginia Capitol Police officer amid a dispute over parking, and for making offensive remarks about the Virginia Senate clerk, Susan Clarke Schaar.

The lawsuit, which Sen. Chase threatened to file last week, seeks an injunction preventing Ms. Schaar from allowing the publication of the censure resolution in the chamber’s official journal.

It also asks the court to issue a judgment that the censure violated Sen. Chase’s First Amendment rights and order the expungement of the censure. Sen. Chase, who recently was demoted in seniority, also is seeking to have her rank restored.

Named in the lawsuit are Ms. Schaar and the Senate of Virginia through Lt. Gov. Justin E. Fairfax, who, in his role, presides as the president of the chamber and oversees its daily work.

Lt. Gov. Fairfax’s spokeswoman, Lauren Burke, said in a statement: “The right to due process for all is of paramount importance in our system. We will await the court’s review of this matter.”

The lawsuit notes that Lt. Gov. Fairfax warned the senators last week about a procedural issue with the resolution, saying the item was not properly before them. The senators voted to go ahead with the censure anyway.

Partially on those grounds, Sen. Chase argues in the lawsuit that her rights were violated.

Sen. Bell said Sen. Chase was given the chance to apologize and denounce and condemn white supremacists and anti-Semitic groups who sought violence at the Capitol, and she chose not to do that.