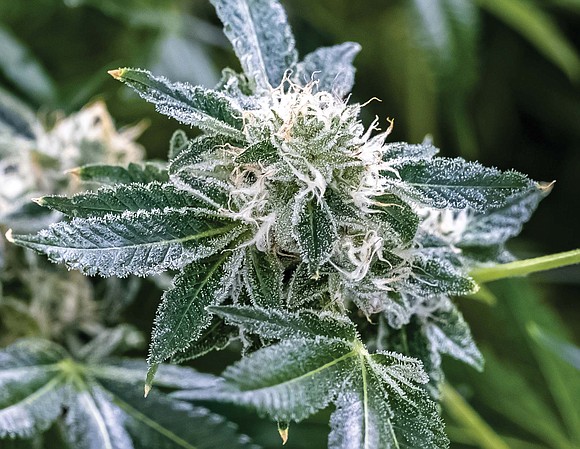 A marijuana plant at the Green Leaf Medical facility in South Side has reached the flowering stage, producing tiny crystals called trichomes that are harvested for medicinal oils THC and CBD. Photo by Sandra Sellars

If recreational marijuana use were legalized in Virginia tomorrow, Green Leaf Medical — a medicinal marijuana dispensary in South Richmond — would be able to distribute products immediately, according to the company’s operations manager, Samer Abilmona.

A recent tour of the facility showed the different areas set up for each stage of the marijuana plant’s life cycle. In some areas, small sprouts group into bushes a bit larger than indoor rubber plants. In other areas, adult plants grow more than 3 feet tall.

More than 70 different varieties of marijuana are grown to treat the myriad of medical conditions of the patients who come through the door with prescriptions from their doctor. Each variety requires different amounts of nutrients controlled by the indoor irrigation system, company officials explained. The labs also house a number of LED light rigs enabling the plants to grow indoors.

Growers and technicians monitor the health of the plants as they flower and produce trichomes, the part of the plant used to make medicinal oils THC and CBD. Those oils are finely processed and prepared for different methods of ingestion by patients — from vapes, tinctures, concentrates and even gummies.

The various forms of medical marijuana are distributed through the facility’s dispensary, a retail-friendly environment mirroring a lobby or urgent care facility. On the far wall is a feature paying homage to the old Philip Morris tobacco warehouse. The dispensary opened to customers who have prescriptions for the medical marijuana in late November.

Green Leaf Medical operates three other facilities in Maryland, Pennsylvania and Ohio. Green Leaf secured approval in 2018 from the Virginia Board of Pharmacy to be the lone medical marijuana licensee for an area that includes the Richmond region and parts of Southside Virginia.

Columbia Care holds the license for the Hampton Roads region and has a production facility in Portsmouth. In total, Columbia Care has licenses in 18 jurisdictions with 107 facilities, including 80 dispensaries and 27 cultivation and manufacturing facilities.

The deal is expected to close this summer.

Mr. Abilmona has nine years of experience in marijuana processing. He said he believes that the path towards legalizing recreational marijuana for adults in Virginia will happen “sooner rather than later.”

“That’s really my job,” Ms. Strand said. “I’ll be on the hill talking to legislatures, educating them about our work.”

She said Green Leaf Medical is one of four processors that are part of the Virginia Medicinal Cannabis Coalition, which contributes its expertise to a number of state lawmakers and researchers, including a recent study released by the Joint Legislative Audit and Review Commission.

Mr. Abilmona said Green Leaf Medical has performed its own outreach to the African-American community to find workers for the Richmond facility.

“We reached out to community organizers and leaders in the faith community when we were opening,” Mr. Abilmona said. “We wanted to get together and have a big job fair, but then COVID happened.”

The South Side facility has 118 employees, according to company officials, 98 percent of whom are local residents.

“A lot of them actually live close by,” Mr. Abilmona said. “We like to stress to people that this is a career and it doesn’t matter where you came from or what opportunities you’ve had access to. We’re ready to educate people, train people and provide a respectful work environment.”