Spotlight on president of Engine Company #9 and Associates 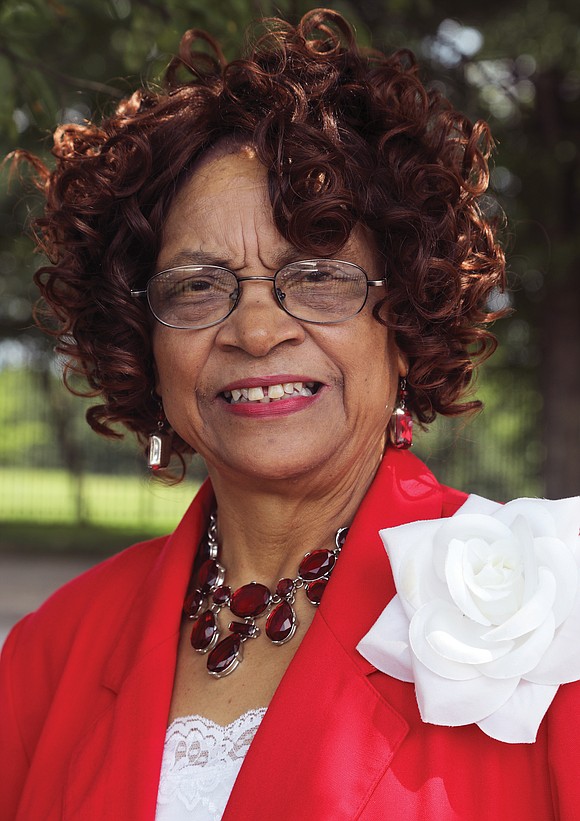 For nearly 30 years, Engine Company #9 and Associates has recognized the trailblazing path of the first African-American firefighters and police officers in Richmond.

And now, the organization’s president, Betty L. Squire, is overseeing the group’s latest effort to showcase the pioneers in a new and big way.

Engine Company #9 and Associates is collaborating with Sir James Thornhill and his Global Arts Initiative to produce a mural celebrating the history of the 10 Black men who were hired by the Richmond Fire Department in July 1950 and stationed at Engine Company #9 in Jackson Ward.

The mural will be unveiled at 6 p.m. Friday, Aug. 6, at Mocha Temple No. 7 Shrine, 613 N. 2nd St. in Jackson Ward. It will be the kickoff of a weekend of events honoring the historic group of public servants that include a banquet and a church service.

Ms. Squire says that “unforeseen circumstances” prompted the organization to put on hold its mural honoring the first Black police officers that had been started on another side of the Mocha Temple building. That work, she says, has been covered over and the focus returned to the firefighters.

It is all part of an effort to retain that segment of Richmond’s history in the public memory by what Ms. Squire describes as “one of the most unique organizations in our city.”

While the organization was started to “preserve and cherish” a strong heritage, Ms. Squire said its mission includes promoting strong relationships between the city’s first responders and the public, with a goal “to be good citizens (and) helpful in the community.”

To achieve these goals, the organization hosts several special events every year, from an annual Service of Remembrance for fallen first responders to a Christmas luncheon that features awards for outstanding service.

“We have the opportunity to honor our heroes on a yearly basis and to thank them for their sacrifices,” Ms. Squire says. “They lead the way for so many of us to have a better life.”

The North Carolina native’s work with Engine Company #9 and Associates has been an opportunity for her as well, one that was taken “to expand (her) horizon,” as she puts it. She first joined the group in 2010, having attended several of the group’s events and being supportive of the organization’s work.

As president, Ms. Squire presides over the organization’s meetings and leads the anniversary celebrations. Ms. Squire has been particularly helpful in raising public awareness, using her connections through her short time on Richmond City Council in 2009 and other ventures to bring local figures and legislators to the group’s events. It’s that depth of connection and experience that she says led members to nominate her for president of Engine Company #9 and Associates in the first place.

While her term as president ends this year, Ms. Squire plans to remain part of the group’s efforts, regardless of what title she may hold.

Meet a dedicated leader in recognizing Richmond’s historic past and this week’s Personality, Betty L. Squire:

Engine Company #9 and Associates is: One of the most unique organizations in our city. We have the opportunity to honor our heroes on a yearly basis and to thank them for their sacrifices. They lead the way for so many of us to have a better life.

When and why organization was founded: Engine Company #9 and Associates was founded in September 1992 as an organization of pioneer Black former and retired professional firefighters, law enforcement officers and associates. It was started to preserve and cherish our strong heritage as we continue to fellowship and to build everlasting unity, friendship and strong family support.

Why I became involved with Engine Company #9 and Associates: It was an opportunity to expand my horizons. I was a frequent visitor to functions and a supporter of Engine Company #9 for years prior to becoming a member. Richmond Fire Capt. Harvey S. Hicks II, who was one of the first 10 Black firefighters in Richmond who was with Engine Company #9, lost his life on June 4, 1963, during a mission to rescue a person trapped in a 23-foot-deep pit. He was a member of my church, Mosby Memorial Baptist Church. He was such a wonderful man, so I was familiar with Engine Company #9. When I was asked to become a member, I accepted with gladness. I made one of my wishes come true when, in February 2020, we unveiled a plaque in Capt. Hicks’ memory at Mosby Memorial. Capt. Hicks, who also was studying for the ministry, was preparing to preach his “trial sermon” when he died. At the plaque’s unveiling, the church’s current pastor, Dr. Price L. Davis, preached the sermon Capt. Hicks had prepared when he died.

Engine Company #9 and Associates serves: The Richmond community and beyond.

No. 1 goal or project of Engine Company #9 and Associates: Our chief goal is to be good citizens, helpful in the community and to keep the memory alive of the original Black hires in the Richmond Fire Department and Richmond Police Department.

We also host a Christmas luncheon, where we give out the Hicks-Evans Award. These two firefighters lost their lives. We also always give out the Arthur C. St. John Award, named for another of the original firefighters.

First Black law enforcement officers hired in Richmond and when: The first Black police officers were hired on May 1, 1946. They were Howard T. Braxton, Doctor P. Day, Frank S. Randolph and John W. Vann. Ruth B. Blair, the first Black female officer, was hired on Dec. 16, 1949.

How to become a member of Engine Company #9 and Associates: One will need to apply and be voted in by the members.

How I start the day: By dragging myself out of bed telling myself that everything will be alright. (smile)

Three words that best describe me: Dependable, honest and dedicated.

How I unwind: I listen to music, play games on my iPhone and watch television.

What I learned about myself during the pandemic: That I am OK. Whatever comes before me, with God’s help, I am OK.

Something I love to do that most people would never imagine: Watch football and jump up and down and scream during the game. The Dallas Cowboys is my team!!!!!!

Most people do not know that: I am the granddaughter of a sharecropper from North Carolina. I worked the farms as a very young girl. We were extremely poor. The above quote applies to me. I did not go to college, but I had the will to succeed.

At the top of my “to-do” list: I lost my mother in February and I am in the process of getting things settled.

Best thing my parents ever taught me: Courtesy and to respect all people.

Person who influenced me the most: My grandmother, Lottie M. Webb.

What I’m reading now: Most of my reading is done online — magazines and newspapers, including the Richmond Free Press.

Next goal: To paint a mural for the first Black police officers and to continue holding the “Service of Remembrance” each year. I would like to see us go into the schools when things are settled and talk with our future heroes. Also participate in more community days and community events.