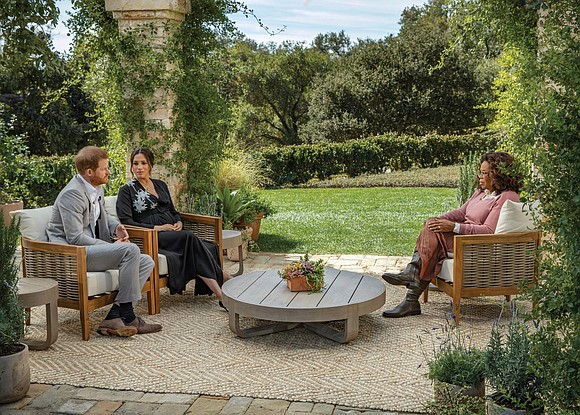 Prince Harry and his wife Meghan, the duchess of Sussex, talk with Oprah Winfrey for television special. Photo by Joe Pugliese/Harpo Productions

LONDON - Explosive allegations by Meghan Markle, the duchess of Sussex, that she faced racist attitudes from both the royal palace and the media in the United Kingdom have sent ripples of shock around the world. But they came as no surprise to many Black Britons.

Whether it’s the disproportionate impact of COVID-19 on people of color or the lack of non-white faces at the top of British media and politics, ethnic minorities in the U.K. say racist attitudes and structures of discrimination are pervasive — and all too often denied by society at large.

“This is a country that doesn’t want to have an honest conversation about race,” historian David Olusoga, who presented the TV series “Black and British: A Forgotten History,” said Tuesday.

In a TV interview with Oprah Winfrey that drew nearly 50 million people worldwide when it was broadcast Sunday night in the United States and Monday night in the U.K., Ms. Markle said isolation and a lack of support from the royal household after her marriage to Prince Harry drove her to thoughts of suicide. Yet when she asked for mental health assistance from the palace’s human resources staff, she said she was told they couldn’t help because she wasn’t a paid employee.

She also said an unnamed member of the royal family expressed “concerns” to Prince Harry about how dark her child’s skin color would be when she was pregnant with the couple’s son, Archie — a statement that drew an astonished “What?” from Ms. Winfrey.

Prince Harry also revealed that the stresses the couple endured had ruptured relations with his father, Prince Charles, heir to the British throne, and his brother, Prince William, illuminating the depth of the family divisions that led the couple to step away from royal duties and move to California last year.

“The whole family is saddened to learn the full extent of how challenging the last few years have been for Harry and Meghan,” according to the statement issued on behalf of Queen Elizabeth. “The issues raised, particularly that of race, are concerning. While some recollections may vary, they are taken very seriously and will be addressed by the family privately.”

On Tuesday in Britain, former CNN personality Piers Morgan quit the popular “Good Morning, Britain” program following a furor over comments he made criticizing Ms. Markle, including remarks saying he didn’t believe anything she said during the bombshell interview.

Mr. Morgan, who had tangled verbally with at least one guest over the interview, was dressed down by the show’s weather forecaster and stormed off the set.

The U.K.’s media watchdog said earlier Tuesday that it was launching an investigation into the show under its harm and offense rules after receiving more than 41,000 complaints over Mr. Morgan’s comments about the duchess of Sussex.

Tiwa Adebayo, a communications consultant and journalist, said the couple’s revelations in the interview bore out her worst fears.

“When Meghan joined the royal family, every person of color in the U.K. was worried,” she said. “This is an institution that is rooted in colonialism. It’s based on white supremacy. I mean, for me, it kind of seemed like ‘How could this possibly end well?’

“I expected there to always be that undercurrent of racism,” Ms. Adebayo added. “But to hear it so outright, it’s really scary. It’s very shocking. And it’s hard to see how the royal family is going to come back from this.”

It’s a long way from the optimism that surrounded Prince Harry and Ms. Markle’s royal wedding in 2018. The relationship between a grandson of Queen Elizabeth II and a biracial American actress was hailed as evidence that, in modern Britain, skin color and background no longer mattered.

Harold Wilson, a 57-year-old local authority worker in Brixton, a district at the heart of London’s Afro-Caribbean community, said Ms. Markle joining the royal family “should have been an opportunity for them to move forward — but the royal family are not like that.”

“Even before the child has been brought into the world, they are worried about the actual tone of the skin of the baby,” he said. “That tells you everything about them.”

Even before the wedding, Prince Harry had complained in 2017 about the “racial undertones” in British media coverage of his then-girlfriend. One tabloid columnist referred to Ms. Markle’s “exotic” DNA. A Daily Mail headline described her Los Angeles roots as ”(almost) straight outta Compton” and claimed she came from a “gang- scarred” neighborhood. A TV host described her as “uppity.”

The couple cited the intrusive, racist scrutiny of Britain’s tabloid press as a reason for their decision a year ago to give up their jobs as senior royals and move to North America.

Like other countries, Britain has faced an un- comfortable reckoning with race since the death of George Floyd, an African-American, at the knee of a white Minneapolis policeman in May 2020 sparked anti-racism protests around the world.

Large Black Lives Matter protests in cities across the U.K. called on the government and institutions to face up to the legacy of the Brit- ish Empire and the country’s extensive profits from the slave trade.

The toppling of a statue of 17th-century slave trader Edward Colston in the city of Bristol in June prompted a pointed debate about how to deal with that history. Many felt such statues extol racism and are an affront to Black Britons. Others argued that removing them was erasing a piece of history.

Britain’s Prime Minister Boris Johnson has criticized the removal of statues, saying, “We cannot edit our past.” Opponents accuse him of trying to sweep the negative aspects of British history under the carpet.

Mr. Olusoga said many Britons like to believe that racism is an American problem, something that takes place elsewhere. He said the U.K. had failed to live up to the story it told itself at the time of Prince Harry and Ms. Markle’s wedding: “That we were this modern multicul- tural country, a country with a Black princess, a country that was at ease with itself, with its history, with its multiculturalism.”

“We need to look at ourselves more honestly,” he told the BBC. “Now is a moment for self-reflection, not just for the palace, but for the country.”