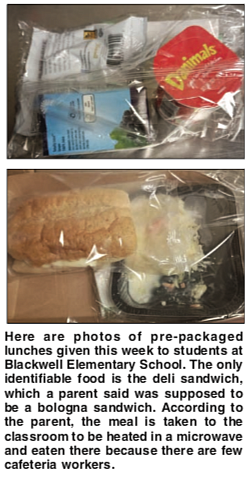 Richmond Public Schools reopened last week and school trash cans are overflowing with rejected prepackaged lunches that students would rather throw away than eat. And parents don’t blame them.

The Free Press has been told that many of the students are throwing away the prepackaged meals, some of which don’t contain the minimal nutritional requirements for students. Trash cans are overflowing with student discards, the Free Press was told.

Victoria Walters quit her job Tuesday as a cafete- ria worker at Blackwell Elementary School because of the terrible meals being distributed to students, including her daughter, Viccori Leake, a 5-year-old kindergartner at the school.

“I was not liking the fact of having to serve this type of meal to our children,” Ms. Walters told a Free Press reporter on Wednesday. “The meals — including breakfast of yogurt or cereal, juice and cup of fruit with milk — are not adequate for the students.”

She said her daughter refuses to eat the prepared lunch meal because students are fed the very same lunch every day — a cold turkey sandwich with cheese, potato salad, fruit and a carton of milk.

Emily Kavanaugh, whose 13-year-old daughter, Maggie, is an eighth-grader at Binford Middle School, brought several of the packaged lunches to Monday night’s School Board meeting and presented them to the board and RPS administrators during the public comment period.

Ms. Kavanaugh said they were described as a deli sandwich on the website of Preferred Meals, the contractor providing the food. “It was meat. I don’t know what kind of meat it is because the sandwiches were not labeled on the package or on the company’s website,” Ms. Kavanaugh told the board.

“There was meat and cheese on a wheat roll, with a juice box that is half the size of a regular carton you would get at a grocery store, a fruit cup and a carton of milk,” she said.

She told the board that the calorie count was only 434, which the U.S. Department of Agriculture says is not enough food or calories for a middle school child. According to the USDA, lunch should contain 650 calories of food.

Ms. Kavanaugh said Maggie wouldn’t eat any of the food provided at Binford, and now carries lunch to school that is prepared at home.

On a positive note, Ms. Kavanaugh told the Free Press she was heartened when School Board member Kenya Gibson, 3rd District, publicly apologized for voting in favor of the Preferred Meals contract.

In early August, RPS awarded a $12.9 million contract to Preferred Meals, the lowest bidder, to provide pre-made meals for schools with limitations that make it difficult to prepare meals onsite. The contract is an expansion of a pilot program that began pre-pandemic.

Ms. Walters said she worked in food service at several RPS cafeterias between 2012 and 2017. There was a better variety of food and options of hot and cold meals prepared from fresh ingredients, she said, with more care and bigger portions for children.

“Now the pre-school and elementary buildings are being served the same thing for breakfast and lunch. No one is pleased with what is being served,” she said, noting that children and parents alike are complaining.

RPS Superintendent Jason Kamras responded to the complaints expressed by students and parents at Monday night’s School Board meeting. He said his staff is looking into the matter.

“Clearly, something went wrong the first couple of days of schools with some of the meals that were distributed,” he told the board. “I hesitate to even call them meals, given some of the testimony that we’ve heard this evening. This is being ad- dressed and rectified.”

In addition to food, the first week of school has unveiled other issues the administration must address, including flaws in the three new school buildings that were not repaired before students arrived for the first day on Sept. 8, the Free Press has learned.

The most significant were found at River City Middle School in South Side, which has a broken elevator, a gym floor that needs to be replaced because of gaps in the floorboards and a problem with the air conditioning system that prevents cooling in part of the building, Mr. Kamras confirmed.

The problems with the new school buildings are just some of the challenges RPS is facing after re-starting in-person classes this academic year after being shut down by the pandemic since March 2020.

Others problems include substantial vacancies among bus drivers. For example, parents were notified that RPS would not be able to provide bus service for children enrolled through the Virginia Preschool Initiative until at least Monday, Sept. 20.

Mr. Kamras was forthright in his response to a Free Press query about the problems in the three buildings, including a faulty chiller in each of the three new buildings that prevents complete air conditioning. He said the RPS team “is working through these issues with the city and are hopeful they will all be covered by warranties.”

The three new school buildings were supposed to be fully ready for use last September. The buildings remained closed as RPS continued in the virtual classroom mode last fall.

Mayor Levar M. Stoney and the city administration said the buildings were complete and held a ceremony in September 2020 to turn over the keys to the buildings to Mr. Kamras. However, none of the buildings was awarded the mandatory certificate of occupancy from the city’s building commissioner until November 2020. Between then and early April 2021, with the buildings still closed, the contractors had an opportunity to make needed corrections.

The Stoney administration, which has pilloried the School Board for reasserting its control of school construction, spent several millions of dollars outsourcing the construction management of the three schools to AECOM, a major company in the field, but the defects remain.

This not the first time new city school buildings have had problems. When the new Huguenot High School was opened in 2015, the gym floor had to be replaced several times because of water problems that became evident after construction. The city’s staff and AECOM took charge of building Huguenot. Previous elementary schools that the city team built reportedly had leaky roofs.

The current problems appear to bolster the case the majority of the School Board has made that RPS can do as well or better than the city staff in developing new buildings.