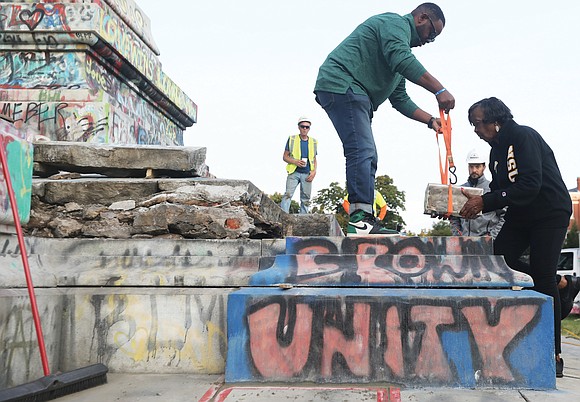 Devon Henry, whose company, Team Henry Enterprises, took down the Monument Avenue statue of Confederate Gen. Robert E. Lee, works with Grindly Johnson, Virginia’s secretary of administration, to place a new time capsule into the base around the pedestal. Photo by Regina H. Boone

No sign of the capsule was found after 12 hours of effort that involved multiple forklifts, a variety of construction equipment. More than 20 pieces of the base were moved from the northeast corner, where the capsule was believed to be.

Ultimately, no capsule was found, but a space was created at the site for a new time capsule, one meant to better represent Virginia and its place in history at this time.

In the new time capsule — a stainless steel box made by Richmond sculptor Paul DiPasquale, who created the Arthur Ashe Jr. statue on Monument Avenue — 39 items nominated by individuals, communities and institutions across Virginia were placed, and the box was then put into the pedestal.

Among the items: a “Monument Avenue” hip-hop album by artists Noah-O and Taylor Whitelow; a photo of a Black ballerina dancing on the graffiti-tagged base holding the Confederate statue; a Black Lives Matter sticker; photos from Gov. Ralph S. Northam’s June 4, 2020, news conference announcing the state-owned statue of the Confederate would be taken down; an ex- pired vial of the Pfizer COVID-19 vaccine and a vaccination card; multiple pieces of literature, art and artifacts representing the Black, Native American, Asian, women and LGBTQ communities; and a copy of National Geographic’s “2020 in Pictures” special issue with the Lee monument on the cover.

“It’s critically important that we tell a much more complete and accurate story of our history as a Commonwealth, as a country, so that we can understand how it still impacts us today and so that we can begin to heal from those wounds,” said state Sen. Jennifer McClellan of Richmond, who was present to watch the removal effort and commemorate the occasion alongside Delegate Jeff Bourne of Richmond and First Lady Pamela Northam.

“This is an important first step,” Sen. McClellan said.

For Kimberly Wilson, great-great-niece of the late John Mitchell Jr., editor of the Richmond Planet who was one of the Lee monument’s earliest critics when it was put up in 1890, the moment was filled with emotions by seeing the symbol of Black oppression gone from the towering perch over Monument Avenue.

Standing on the wet grass looking at the now-empty pedestal, she was clear about the enormous importance of Mr. Mitchell’s protest against the statue — and about those who took up the task of its removal in the century after his time.

“It makes me feel proud that he got it right,” Ms. Wilson said.

The effort to find and replace the time capsule was driven in part by research from local and state historians into its purported location. Its creation was traced back to 1887, with it reportedly being placed in the site before the installation of the Lee statue in 1890.

The plan to find and replace the time capsule was decided last March, as legal battles over Gov. Northam’s ability to remove the state-owned statue continued in the courts.

Items said to be in the old capsule included a U.S. silver dollar, a collection of Confederate buttons and a picture of President Abraham Lincoln lying in his coffin.

The nature of the items would serve as another reminder of the false efforts Southern white people made toward reconciliation following the end of the Civil War, as noted by local journalist and author Dale Brumfield, and of Virginia’s continuing commitment to the Lost Cause.

“I think it just gives a big middle finger to Lincoln, the Union and what it stood for,” Mr. Brumfield said.

While there are no plans to search further for the old capsule at the site, the ultimate fate of the pedestal is still up in the air. Those asked seemed uniform in the belief that the pedestal, reclaimed by the Richmond community as a stanchion for racial equity and against police brutality, was a powerful image of community protest and art, and one whose fate should be decided by the community.

“I think it’s the purest form of public art, when we talk about community engagement and how communities rise up and also collaborate,” Ms. Wilson said. “We should be grateful that we’re all witnessing this and being a part of it, because it doesn’t happen in this way often.”