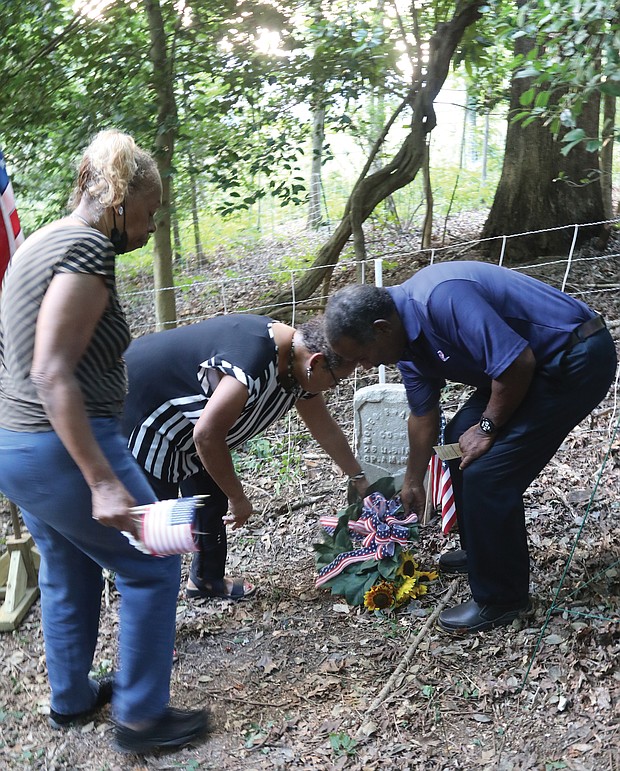 Honoring a Buffalo Soldier/Descendants of Moses Bradford Jr. of Henrico County, a Buffalo Soldier who served in the 25th Infantry during the Spanish-American War, place a wreath on his grave during a twilight memorial service at the Sons and Daughters of Ham Cemetery near Bandy Field in Henrico County on July 28. The family members, from left, Diane Winston Jones, Linda Truman Nash and Spencer Truman, participated in the local commemoration on National Buffalo Soldiers Day, which honors the contributions of some of the earliest African-American troops in the U.S. military. The commemoration included a three-volley salute by members of the Veterans of Foreign Wars Post 9808 in Mechanicsville, and a flag presentation, below, by Najiek Harris, 15, left, and Christian Hicks, 13, of Scout Troop 432 in Church Hill. Pvt. Bradford, who fought during the Battle of El Caney in Cuba on July 1, 1898, suffered a heat stroke while in Cuba and was returned home as a casualty of war. He was honorably discharged from the military in 1899, and went on to live to the age of 55, succumbing in 1925. His government-issued gravestone is one of only two left in the historic African-American cemetery that is located on an acre of land purchased by the Ham Council in 1873 and now is listed with the Virginia Department of Historic Resources.