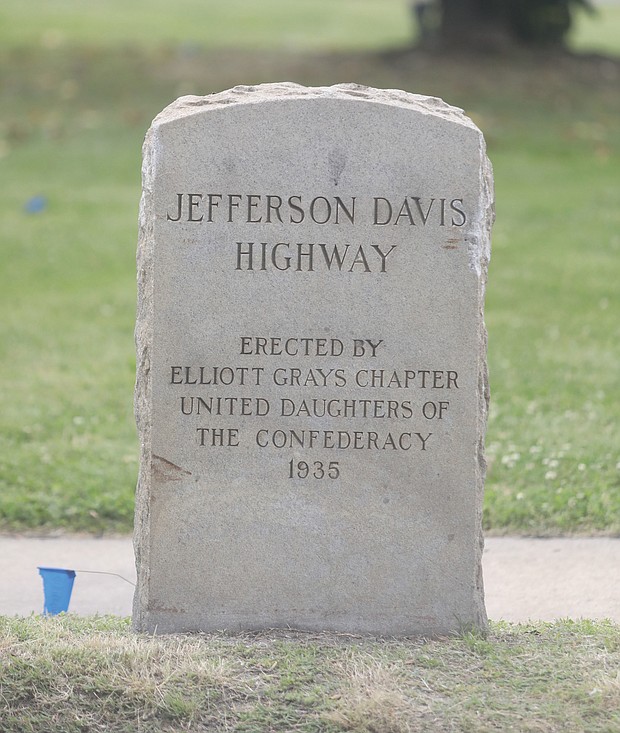 Cityscape-City Hall has not been able to remove this stone highway marker noting that a stretch of U.S. 1 in South Side, now known as Richmond Highway, was once called Jefferson Davis Highway to honor the traitorous Confederate president. Location: A grassy strip in front of the city Department of Public Utilities’ Field Operations and Maintenance Facility at Maury Street and Richmond Highway. A Richmond chapter of the United Daughters of the Confederacy placed the 4-foot-tall marker on the site in 1935. City Council voted last December to change the name of the roadway. Robert Steidel, the city’s chief operating officer, stated Tuesday that this is one of a series of markers placed by the UDC along U.S. 1 in the city and other locations. He said all are listed on the National Register of Historic Places, which complicates their removal. He stated that city staff is working with the Virginia Department of Historic Resources to come up with a plan to remove the marker. The plan will be presented first to the City Planning Commission. Meanwhile, the Virginia General Assembly, which nearly 100 years ago designated U.S. 1 as Jefferson Davis Highway, this year approved replacing the Davis name with Emancipation Highway as of Jan. 1, 2022, in localities such as Chesterfield County that have not renamed the roadway.