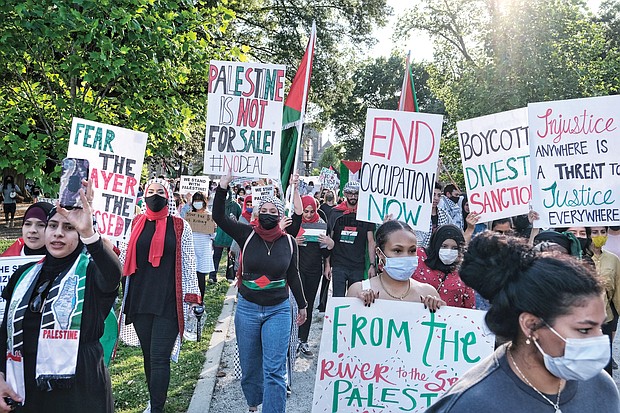 Standing with Palestine-More than 1,000 people gather Wednesday evening in Monroe Park for a rally and march calling for Israel to stop the bombing in Gaza. Since May 10, more than 227 people have been killed, including 64 children, and another 1,600 have been injured in the latest violence between Israelis and Palestinians. Untold numbers have been left homeless. The Israeli government has defended its airstrikes as a way to take out Hamas’ military infrastructure. In return, Hamas militants have answered the airstrikes with rocket attacks. The Richmond demonstration called for a ceasefire in Gaza, for self-determination for the Palestinian people and for an end to U.S. funding for Israel as it puts Palestinians living in Gaza under tight control and restrictions. The rally was sponsored by the Arab American Association of Central Virginia, Richmonders for Peace in Israel-Palestine and the Virginia Defenders for Freedom, Justice & Equality.