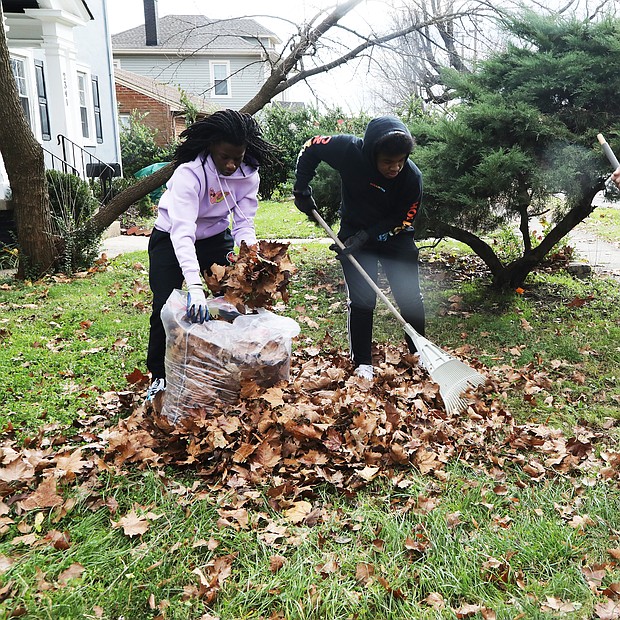 Cousins Armari Fells, 14, left, and Jeremiah Jefferson, 16, pitched in to help their grandfather, Tyrone Prentiss, spruce up the yard of his sister and her husband, Patrick and Delores Llewellyn, on brook Road in North Side. They took advantage of the sunshine last Saturday to rake and bag the leaves for pickup. Armari, who lives in Atlanta where his schooling is now virtual, has been visiting relatives in Richmond since Thanksgiving. 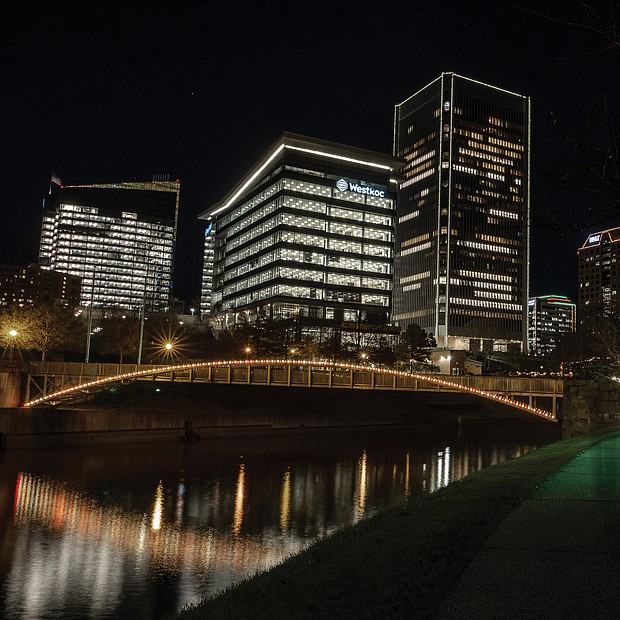 Richmond’s skyline comes to life during the holiday season, with the glow of lights embracing Downtown and the riverfront. The seasonal lighting officially got underway Friday, Dec. 4, with RVA Illuminates. That’s when the lights simultaneously go on after a countdown by city officials and others. Because of the pandemic, the ceremony was held virtually this year and broadcast on ABC 8News and on WRIC’s website. Holiday Lights on the Riverfront, presented by Venture Richmond, followed, with decorative lights going on at Brown’s Island to the Turning Basin on the Canal Walk. Entertainers and hot beverages also are a part of the riverfront celebration, which will continue from 6 to 8 p.m. Saturday, Dec. 12 and Dec. 19. People are asked to wear masks and to practice social distancing. This photograph of the Downtown skyline was taken from Brown’s Island. 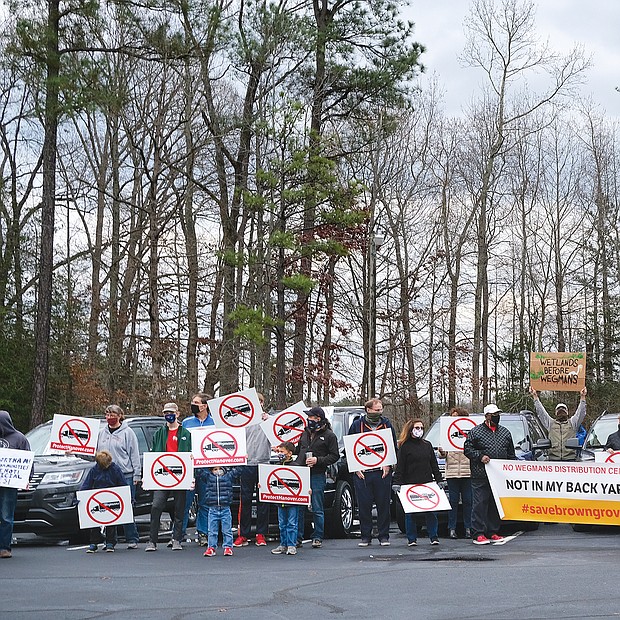 Protesters continue their battle to halt a proposed $175 million distribution center that Wegmans Food Markets wants to build on Ashcake Road in Hanover County across the road from historic Brown Grove Baptist Church. The group gathered Saturday in front of the 150-year-old church to once again raise alarm about the planned distribution center that they say will disturb a slave graveyard, wetlands and the rural harmony of the historically Black community with its proposed huge size and flood of trucks. The demonstrators traveled to Short Pump in Henrico County to continue their protest in front of the Wegmans supermarket. The project, which is expected to create 700 jobs, already has been approved by Hanover County, but remains on hold while Wegmans seeks required environmental permits. Opponents have gone to court in a bid to overturn the county’s approval and are poised to try again after a Hanover Circuit Court judge dismissed their first lawsuit just before Thanksgiving. 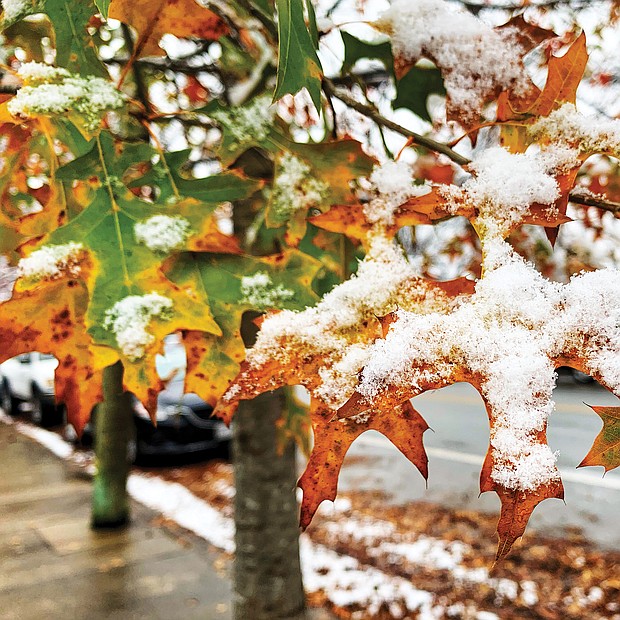 A sprinkling of snow in the West End 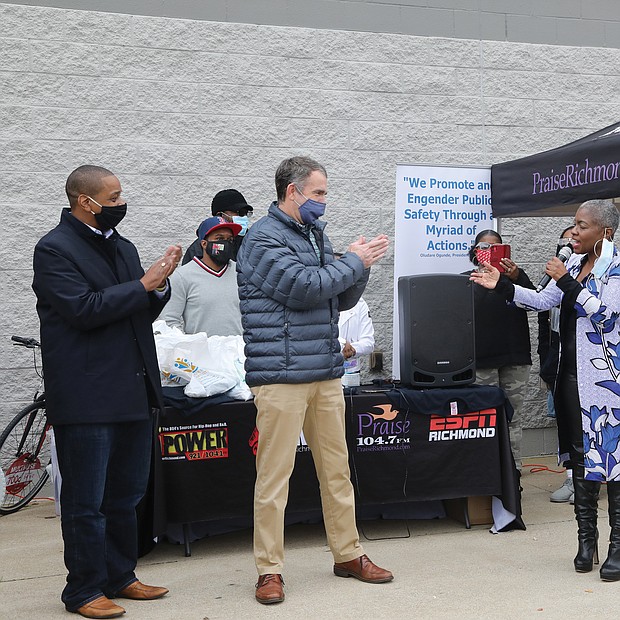 Radio personality “Miss Community” Clovia Lawrence of Urban One gets a big surprise last Saturday when Gov. Ralph S. Northam, center, and Lt. Gov. Justin E. Fairfax, left, show up during her 17th Annual Toy Drive outside the Walmart store on Sheila Lane in South Side and present her with proclamations honoring her 30 years of community work. The surprise presentation was organized by Christopher J. Woody of the Woody Foundation. Ms. Lawrence started the toy drive in 2004 to assist working families who couldn’t afford gifts for their children during the holiday season. Since then, more than 60,000 donated toys have been given to Richmond area families. Even as she was being honored, Ms. Lawrence was busy encouraging shoppers to purchase and donate toys for youngsters in need. 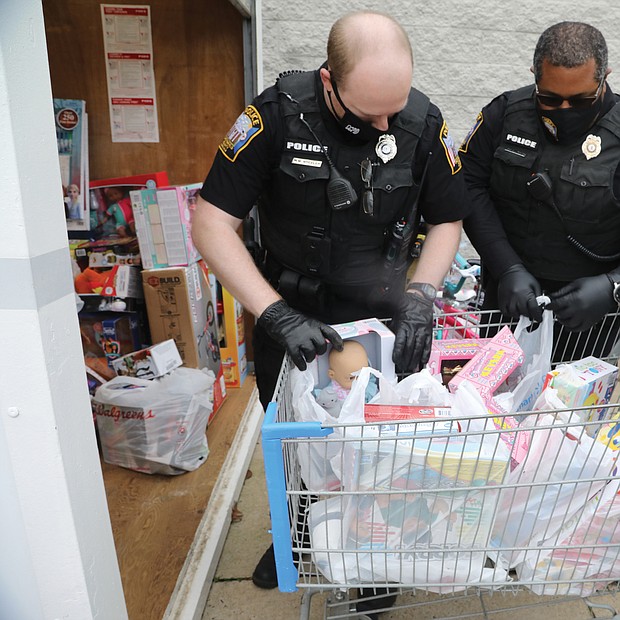 Officer Matt Wheeler, left, and Sgt. George Turner of the Chesterfield Police Department load donated toys into a storage container until they can be distributed.