Blue lights illuminate protesters who react after a police SUV runs into a cyclist on Monument Avenue around 9:30 p.m. Saturday. State Police in riot gear stand near an armored vehicle in front of Richmond Police headquarters at Jefferson and Grace streets Tuesday. A North Side resident waves to members of the 381 Movement who marched Monday through the neighborhood, chanting “Black Lives Matter” and calling for education reform. Jeffrey L. Peters of Middlesex County holds a photo of his nephew, Marcus-David Peters, 24, a high school biology teacher who was fatally shot by a Richmond Police officer in 2018 during what has been described as a mental crisis. Mr. Peters was taking part in the 5000 Man March on Saturday at the Lee statue and raising awareness of the slaying. Heavy equipment is on the scene as concrete barriers are placed around the Lee statue on Wednesday. The state Department of General Services installed the barriers as a safety precaution while it maps out the removal of the statue under an order from Gov. Ralph S. Northam. 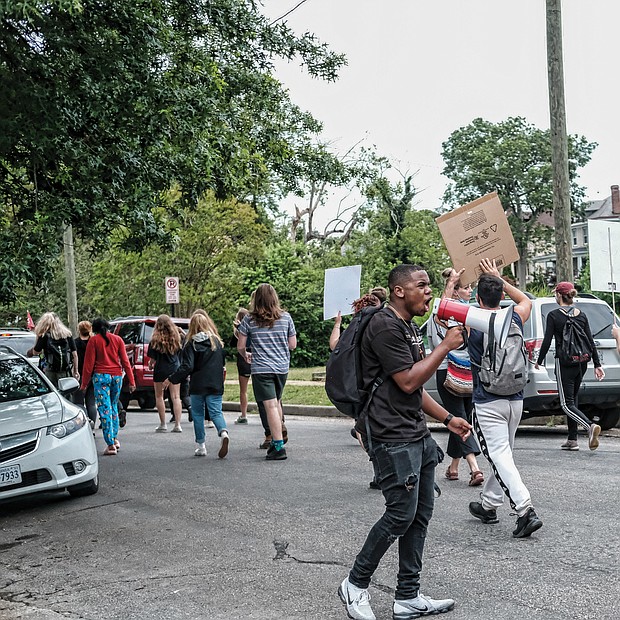 Members of the 381 Movement march along Hawthorne Avenue in North Side for education reform on Monday. Legendary Henrico County educator Virginia Randolph made a difference during a career that spanned more than 50 years starting in the late 1890s and touched the lives of countless students and teachers alike. Today, her likeness stands with other Virginia women celebrated in “Voices from the Garden: The Virginia Women’s Monument” in Capitol Square. A new General Assembly building is going up behind her. Ms. Randolph is credited with upgrading education for black children in then-segregated public schools in Henrico County and influencing the teaching of black children across the South and in Africa with the Henrico Plan she wrote. In 1892, Ms. Randolph opened the Mountain Road School and went on to become the first Jeanes teacher in the United States, working to upgrade vocational training programs for black students at 23 schools. She started the first in-service training for black teachers and pushed hands-on training and community self-help programs. She also launched the first school-based Arbor Day program in Virginia and was influential in serving on state commissions on industrial education and public health. Her legacy lives on through the Southern Education Foundation, in the Henrico school that is named for her and in the Virginia Randolph Foundation that awards scholarships to high school students in the county. Rain-kissed clematis in North Side