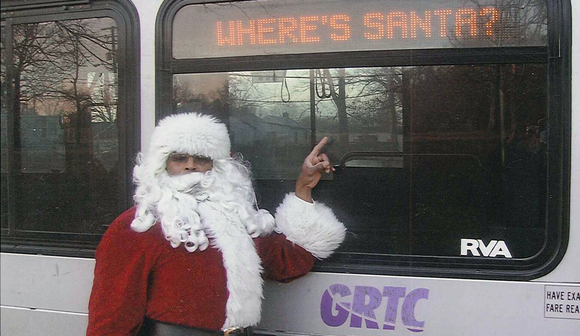 Glenn “Nighthawk” Williams drove for GRTC for 32 years before retiring and surprising riders with gifts in the role of Secret Santa. Photo courtesy of Glenn Williams

GRTC bus riders were pleasantly surprised last week when Santa Claus took time away from his busy holiday preparations and greeted them at the transfer plaza in Downtown.

“Ho! Ho! Ho!” the jolly bearded visitor from the North Pole shouted. “Thanks for riding the bus today and all throughout the year!”

He then handed each rider a Go Card for a free bus ride.

GRTC buses flashed the “Where’s Santa?” message during the four days to promote the holiday event.

It was a natural fit when GRTC officials asked Mr. Williams, a retired GRTC bus driver of 32 years, to don a Santa suit.

For much of his career, he drove the Ginter Park, Highland Park and Forest Hill Avenue routes. He said playing Santa Claus “was like a reunion for me. I saw a lot of the operators I’ve known for years, and the riders, who are like family to me.”

Mr. Williams has been spreading good cheer for more than two decades by wearing an array of creative, colorful costumes to celebrate different causes and occasions.

The cheerful 63-year-old South Side resident wore an Uncle Sam costume to celebrate President Obama’s historic election, promoted fatherhood by wearing a Superman costume and dressed in Darth Vader, Frankenstein, Kung Fu and Mr. T outfits just for the fun of it.

He appeared as Captain America last year when he and four other suit-and-tie wearing GRTC employees were honored at a retirement ceremony. He resigned from the company to care for his father, who has dementia.

“I do what other people are afraid to do,” said Mr. Williams, who wears a seemingly endless smile regardless of the costume he’s in. “It takes people back to their childhood. I love to bring a smile to people’s faces. They get a twinkle in their eyes and want to take pictures with me.”

Mr. Williams said he first started donning costumes when he organized group bus trips to Atlantic City. “I wore a colorful jacket and people really liked it. It seemed to unite the people with me in a positive way.”

He recalls first wearing a Batman costume on one trip and then thinking, “What can I wear next time?”

As he retires as Santa Claus for the time being, Mr. Williams has another lively costume in the works.

“I’m going to be Thor, the thunder god, with lights and wearing dreads,” he said, smiling.

Stay tuned for his next dazzling appearance.