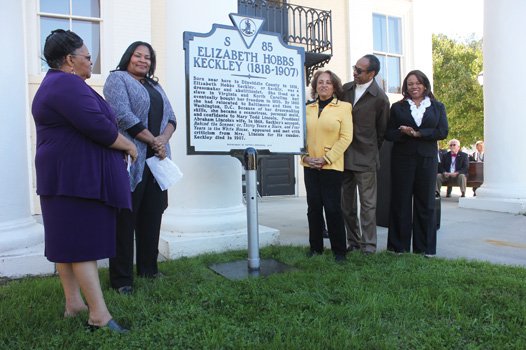 She bought her freedom from enslavement and later became a dressmaker, personal maid and confidant to Mary Todd Lincoln, President Abraham Lincoln’s wife.

Her memoirs, “Thirty Years a Slave and Four Years in the White House,” were published in 1868.

Filmmaker Tim Reid, whose Petersburg studio, New Millennium, is completing a documentary on Ms. Keckley, said she lived her life with great character.

Historian Elvatrice Belsches of Henrico County, who is working with Mr. Reid on the documentary, noted that director Steven Spielberg’s Academy Award-winning movie, “Lincoln,” contained a portrayal of Ms. Keckley, bringing her into the public consciousness.

Ms. Keckley was born just south of Petersburg in 1818. She was enslaved in Virginia and North Carolina.

She was subjected to rapes and beatings, but taught herself to read, write and make clothes.

She relocated to Baltimore in 1860, opened a dressmaking business and became known for making dresses for the rich and powerful.