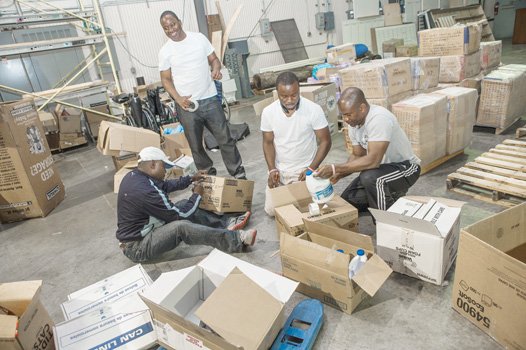 From left, Garway Bright, Othello Dixon, Charles Jallah and Joseph Jones pack food and medical supplies for Virginians in Action for Liberia Against Ebola. The supplies are being shipped from a Chesterfield County warehouse to counties in Liberia most affected by the Ebola outbreak. Photo by James Haskins

First it was a problem “over there.”

And people are scared.

Dr. Birch is chairman of Virginians in Action for Liberia Against Ebola.

The campaign began in August, formed by Virginia residents with personal connections to Liberia.

The West African nation is one of three hit hardest by the Ebola epidemic. Nearly 5,000 people have died from the Ebola outbreak in Liberia, Guinea and Sierra Leone since December 2013.

Many VALAE participants have lost relatives to Ebola. During the weekend, several members and volunteers packed boxes of medical and food supplies that will be shipped to three high-risk counties in Liberia.

The supplies, which include 250 boxes of rice and beans, will take four to six weeks by cargo ship to reach Liberia, Dr. Birch said.

In the United States, while one is more likely to get struck by lightning than contract the Ebola virus, people are still afraid.

As was the case with the AIDS scare in the 1980s, many Americans ignore facts and indulge that fear.

And fear begets panic, prejudice and myriad other problems.

“The fear is reasonable,” Dr. Birch told the Free Press. “Nobody wants to die, and nobody wants their country overcome by this disease.”

Dr. Birch’s eldest daughter, Olive, is attending the University of Liberia in the nation’s capital, Monrovia. Classes have been canceled at all schools in the area.

Dr. Birch said he and his wife, Joan, are struggling with the fact that they didn’t get Olive out of Liberia earlier.

Fortunately, communication has not been a problem.

“The world has become a global village, and cellphone service in Liberia is actually cheaper than it is over here,” Dr. Birch said.

Mr. Klain, who has served as chief of staff for two vice presidents — Joe Biden and Al Gore — will be the national response coordinator for Ebola. He will report to the homeland security and national security advisers.

The first patient diagnosed with Ebola in the United States was Thomas Eric Duncan on Sept. 30. Mr. Duncan had traveled from Liberia to Dallas earlier in the month. He died Oct. 8.

Two of Mr. Duncan’s nurses at Texas Health Presbyterian Hospital, Nina Pham and Amber Vinson, later tested positive for the Ebola virus. Both are being treated in isolation in East Coast medical centers.

Dr. Thomas Frieden, director of the U.S. Centers for Disease Control and Prevention, said Dallas hospital workers may not have had the proper protective equipment or training in dealing with Ebola.

He said VALAE continues to collect supplies to aid in the effort to contain Ebola in Africa.

He noted that all financial contributions to VALAE go toward purchasing supplies.

The minister said he hopes to make a big splash when contributions pour in.

“We need to use those big checks — like when someone wins the lottery,” he said.

“We want to put a positive face on this.”