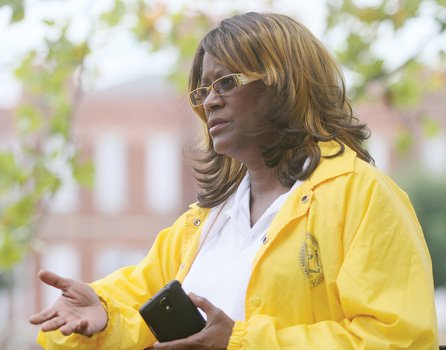 The president of the state NAACP insists the organization’s still shuttered headquarters office will reopen.

But Carmen Taylor of Hampton could not say when.

She also could not say when the state organization would hire an executive director to replace ousted King Salim Khalfani, who was dumped in February after 15 years.

She said she and the board have assessed the organization and are still considering “what do we need out of the next individual (we hire). Is it an executive director, a lobbyist or someone to man the office?” Again, there’s been no decision, she said.

Ms. Taylor responded to questions Saturday when she came to Richmond to participate in a “Hands Up, Don’t Shoot” rally in Downtown that was held in response to the police slaying of unarmed teenager Michael Brown Jr. in Ferguson, Mo.

She said the state NAACP is financially sound, but said she and other boad members would not rush decisions about reopening the office or hiring staff.

“I go by the old adage, ‘Prior preparation prevents pitifully poor performance,’” she said.

However, she said, “I want the community to understand and realize we have never stopped being there for them. The NAACP is more than one person.”

“From day one last year at the state convention (when she was elected), we passed a resolution saying we support Medicaid expansion,” she said.

“I asked for all the local units to meet face-to-face with area legislators and advocate for Medicaid expansion,” Ms. Taylor said.

She said she also went to the General Assembly to lobby legislators to expand Medicaid to up to 400,000 adults who cannot afford health insurance.

And, Ms. Taylor said the state NAACP is drafting a letter to Gov. Terry McAuliffe in support of his efforts to bypass the General Assembly to provide Medicaid expansion. The governor has said he is considering such action.

Ms. Taylor said she also has worked with local chapters to ensure voter registration efforts are underway as November’s midterm elections near.

She said she has crisscrossed the state in her car “educating people on legislative issues” such as “ban-the-box” to eliminate felony questions on job applications and voting rights ahead of the next General Assembly session.

In the absence of a state executive director, Ms. Taylor said she has encouraged community members to first approach their local chapters with problems and concerns.

“Then, they should come to the state if they can’t find a solution,” she said.

“The organization is still relevant,” Ms. Taylor said. “It’s relevant to me in my heart. It will always be relevant, not just to African-Americans, but to all people.

“As an organization, we are not going to be afraid to stand up and speak out and take the lead on issues. That’s been our mission now, and it will continue to be.”