Spotlight on Richmond Firefighter of the Year 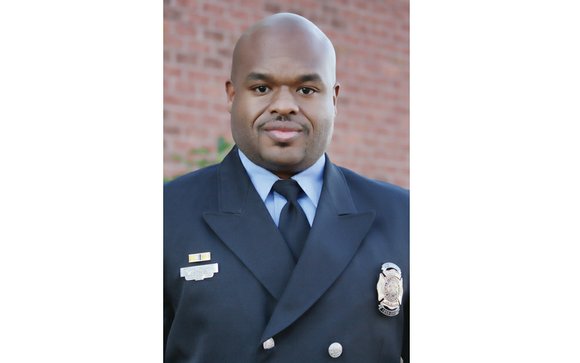 James A. McCain says being a firefighter with the Richmond Department of Fire and Emergency Services is a dream come true.

After earning a bachelor’s degree in biology, Mr. McCain worked in physical therapy for a few years at a Richmond fitness club. Then in 2007, he was accepted into Richmond’s Department of Fire and Emergency Services’ Fire Training Academy. The rest, as they say, is history.

Now in his eighth year with the department, Mr. McCain recently was honored as Richmond Firefighter of the Year. The award was presented in October at a ceremony at Richmond CenterStage in Downtown.

He is a certified CPR instructor, a peer fitness instructor and a field training instructor for the department that has 376 firefighters.

He was nominated for the award by Lt. William B. Bullock of Engine Company 11, located at 1235 N. 28th St. in Church Hill. In his nominating letter, Lt. Bullock describes Mr. McCain as “very dependable and a valued asset” to the Church Hill firefighting team.

“He is an energized and dedicated employee and is well respected by his peers and other members of our organization,” Lt. Bullock wrote. “Firefighter McCain demonstrates exemplary service to our city and its citizens, and his attitude and hard work should not go unnoticed.”

Mr. McCain says he was surprised when he learned he had won the award.

He says he received a plaque for winning the honor that he displays at his Goochland County home and a ribbon to wear on his dress uniform.

Mr. McCain recalls the gamut of experiences he has had on the job in Richmond.

He then describes a harrowing experience this summer when he and other firefighters fought a blaze in Church Hill in mid-August.

“We entered a two-story duplex and the whole downstairs was engulfed in fire,” Mr. McCain recalls. “I was on the (water hose) nozzle.

“We extinguished the fire on the first floor,” he continues, “then went upstairs, where there was a fire in a bedroom. We put that out as well.”

He says that it was “very hot under the personal protective equipment” as he and other firefighters fought the blaze.

Mr. McCain said they were able to keep the fire from spreading to an adjacent home in the same building. He estimates he has fought about 10 major blazes during his career.

“You’re nervous,” he says, describing what it feels like during a big firefight. “You just want to go in and perform to the best of your ability. You revert to the training that you’ve received all through the years and extinguish the fire in a quick and safe manner.”