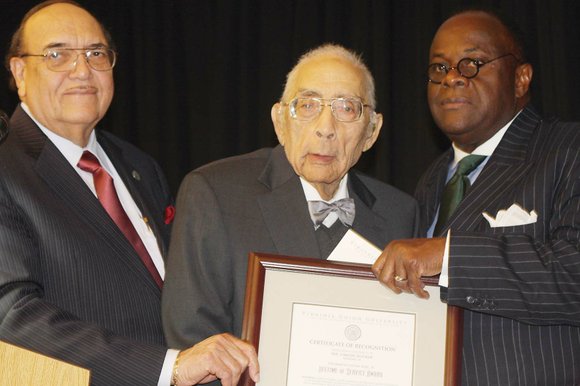 Who influenced you the most: Carl Murphy, former publisher of the Afro-American, and my uncle, James H.N. Waring Jr. They were classmates at Harvard University. They would take me to Harvard-Yale boat races. They encouraged me to become a journalist.

How many presidential administrations did you cover: Ten.

Which president was most committed to the advancement of civil rights: Even though Lyndon Johnson signed the Civil Rights Act of 1964 and Voting Rights Act of 1965, I always felt the spirit of his predecessor, John F. Kennedy, was the turning point.

Is the Black Press relevant today: It always will be, even when it’s not on the front line sometimes. It’s in a position to come to the rescue if necessary.

What is the responsibility of the press today, particularly the Black Press: I think the biggest role we have is a high percentage of our people are uneducated and unemployed and we’ve got to rescue as many of them as we can.

How do you start your day: With a breakfast of Honey Nut Cheerios.

What is your favorite late-night snack: Yogurt.

How do you unwind: I like to play dominoes, poker and Solitaire, read the newspaper (Washington Post) and watch TV.

How would you describe yourself: I’m relaxed, always   positive, friendly and non- judgmental.

What is your legacy: I’m the son of a Baptist minister who always tried to report the truth and advance the cause of my people.