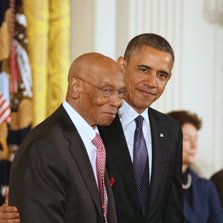 President Obama awards the Presidential Medal of Freedom to baseball Hall of Fame player Ernie Banks at a White House ceremony in November of 2013. Photo by Paulette Singleton

Chicago Cubs Hall of Famer Ernie Banks, the pioneering and famously affable slugger hailed by the team as “the greatest Cub in franchise history,” died Friday, Jan. 23, 2015, at age 83, the club announced.

A shortstop and first baseman renowned as “Mr. Cub” and “Mr. Sunshine,” Mr. Banks joined the team as its first black player in 1953. That was six years after Jackie Robinson broke Major League Baseball’s color barrier on the Brooklyn Dodgers. Mr. Banks remained with the Cubs for 19 seasons until his retirement in 1971, hitting 512 career home runs and 1,636 runs batted in.

Mr. Banks later became the firstAfrican-American to manage a major league team when, while serving as a Cubs coach in May of 1973, he filled in for ejected manager Whitey Lockman during a game.

Mr. Banks died Friday evening in Chicago after suffering a heart attack according to an attorney for his family, Mark Bogen.

Besides his athletic gifts on the baseball diamond, Mr. Banks was famed for an irrepressibly upbeat demeanor that never seemed to fade during his tenure with the perennially hapless Cubs.

The statue is to remain in the plaza through Saturday.

one of the best ballplayers of all time, but a great man who made our city proud from the day we first met him in 1953,” Mayor Emanuel said in a statement.

A memorial service for Mr. Banks is scheduled for 10 a.m. Saturday at Fourth Presbyterian Church in Chicago.

Mr. Banks was awarded the Presidential Medal of Freedom, the nation’s highest civilian honor, by President Obama in 2013.

“He was one of the greatest players of all time,” Cubs Chair- man Tom Ricketts said in a statement. “He was a pioneer in the major leagues. And more importantly, he was the warmest and most sincere person I’ve ever known.”

He also was voted onto the league’s All-Century Team and was honored on the field at the 1999 All-Star Game at Boston’s Fenway Park.

“We’ve got the setting: Sunshine, fresh air. We’ve got the team behind us. So, let’s play two,” Mr. Banks said with a smile during his Hall of Fame induction speech.