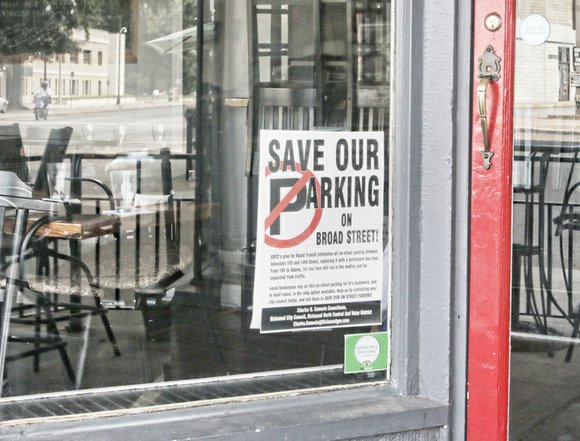 Business owners and residents along Broad Street and the Fan are posting signs protesting the loss of parking spaces on Broad Street because of GRTC’s planned bus rapid transit. Photo by Sandra Sellars

Travelers along Broad Street will see a far different thoroughfare through the heart of the city in October 2017. That’s when the highly anticipated bus rapid transit known as “GRTC Pulse” is scheduled to whisk riders along a 7.6- mile route from Willow Lawn in the West End to Rocketts Landing in the East End.

While GRTC’s regular fleet of buses will continue to make their appointed stops curbside along Broad Street, the rapid transit route will run every 10 to 15 minutes — and with fewer stops — along a dedicated lane that will include the median.

According to preliminary designs of the $54 million project that were unveiled Monday and Tuesday, parts of the route will include 3.2 miles of lanes dedicated only for the rapid transit buses. One will run down the middle of Broad Street beginning in the West End from Thompson to Foushee streets. Another will be curbside from 4th to 14th streets in Downtown.

Construction of the median lanes will reduce Broad Street’s normal travel lanes from three to two lanes in each direction along that route.

GRTC officials, city representatives, design engineers and others discussed the project and answered questions from members of the public and others at the meetings at the University of Richmond’s campus in Downtown.

“We’re still in the design phase. We just completed 30 percent design plans,” GRTC CEO David Green told the Free Press prior to Monday’s meeting at UR.

“It’s exactly on schedule,” he added of the project that was first announced in fall 2014.

Construction would begin in mid- to late 2016.

Not everyone is happy with the project as it currently is proposed. Some residents and business owners living and working along the route worry the plan will negatively impact them.

One example: GRTC officials are proposing to eliminate 306 parking spaces along Broad Street from Thompson Street to 4th Street to make way for the bus route. Initially, they had recommended removing 708 parking spaces, but pared that back after business owners loudly complained that could drive away customers and threaten their businesses.

Also, all on-street parking would be removed between 4th and 14th streets to accommodate the exclusive rapid transit curbside lanes.

Officials said that they would seek permission to use some parking lots during times they’re not being used along and off Broad Street to help compensate for the loss of parking spaces. They said an agreement has been reached with the Science Museum of Virginia to provide 10 parking spaces for a park-and-ride, similar to larger ones available to bus riders in the suburbs.

Some community members have put signs up protesting the loss of the parking spaces and noting other negative impacts they fear the project will have. Some residents complain GRTC and the city are rushing the project and have not adequately sought their input.

The RVA Coalition for Smart Transit, an umbrella group of neighborhood associations, has formed to “serve as a voice” for the community on mass transit issues.