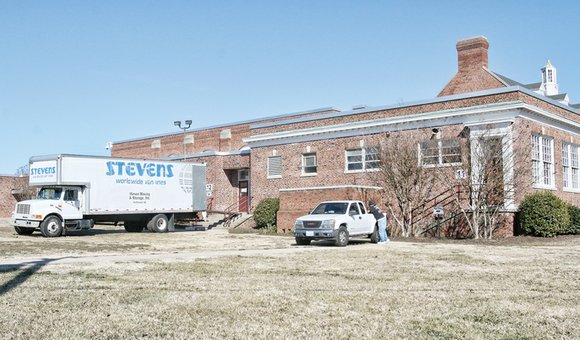 Movers are in place at Elkhardt Middle School to load and haul all school materials across town to Clark Springs Elementary School last Friday. Photo by Sandra Sellars

Did Richmond Public Schools officials ignore potential health dangers from mold at Elkhardt Middle School long before the South Side school was shut down and the students transferred to the former Clark Springs Elementary School?

That’s what attorneys for a group of parents, teachers and staff members want to find out in laying the groundwork for a possible lawsuit.

On Monday, attorney Stephen C. Piepgrass of Troutman Sanders law firm, filed a freedom of information act request with the school system seeking all records, documents and correspondence related to health issues and indoor air quality dating to 2002 on the Elkhardt and Clark Springs buildings.

In the four-page request, Mr. Piepgrass stated “there had been environmental problems at Elkhardt in the early 2000s. … Additionally, we know that RPS knew of leaking steam pipes at the school sometime before August 2014.

“We know that students, teachers and staff were exposed to dangerous mold — and perhaps other environmental contaminants,” he stated, prompting the decision last month to close the school.

He indicated that the School Board and administration has so far “refused to provide medical exams” to those impacted by the mold, despite the potential liability from inaction.

Paul Goldman, an attorney also involved in the case, said people affected by the mold have “the right to know what the board and administrators knew about the health issues at Elkhardt and when they knew.”

The school system has not commented about the FOIA request. School system policy, however, is not to comment on issues that involve or could lead to litigation.

Superintendent Dana T. Bedden previously has said that he and his staff learned about the mold problem at Elkhardt in late January and acted quickly to relocate the students, teachers and staff. — JEREMY M. LAZARUS