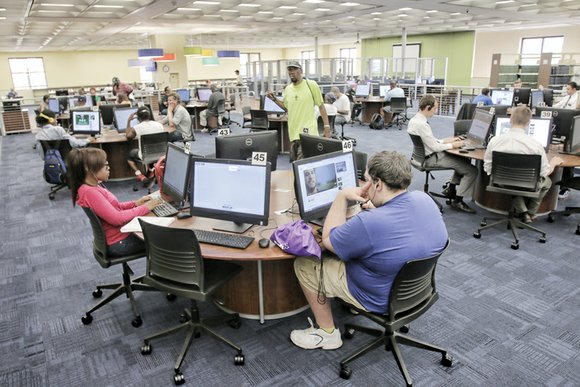 Main Library patrons work intently on computers on the second floor. The library now has 95 computers available to serve the public. Photo by Sandra Sellars

Every day, dozens of people flood into the Main Library in Downtown to use public computers.

They come to check emails, seek employment, do research and handle other activities in the online world, including paying bills and applying for visas.

Thanks to a $1 million upgrade, the Main Library offers more high-tech resources than ever before to help close the digital divide in the city.

As a result of the work, the second floor has largely been given over to computers, said Adam Zimmerli, digital literacy librarian who oversees the operations.

That work also has enabled the library to increase the number of available computers for public use from 48 to 95, with additional computers available in special sections for children and teens.

“This is a great resource for the community,” Mr. Zimmerli said, adding he and the rest of the staff hope to see increasing numbers of people “using these computers and the other services we offer.”

He said the most popular are the 50 desktop computers that fill a big part of the second floor. People can use the computers for an hour at a time — and can stay on longer if all the seats aren’t taken.

There also are tables for people with laptops and tablets who just need a wireless connection and 18 public charging stations to power up devices.

Forty other computers are available in three classrooms and special labs on the second floor, including the city’s law library, Mr. Zimmerli said, with six other computers set aside specifically for job seekers.

The library also teams up with groups such as the AARP Foundation, which uses classroom space to provide computer literacy classes for seniors. Partners also include Career Prospectors, Coderdojo, Communities in Schools, the city’s Department of Social Services, the Partnership for Families, RESOURCE Workforce Centers and the  Resource Mothers Program.

Computers have been in the Main Library and the branch libraries for years — a reflection of the information revolution that has changed the way that books and music are published and made available.

Now the computer space on the second floor of the Main Library almost equals the space on first floor that is occupied with books.

Some space on the second floor includes shelves for magazine collections and for some newspapers and periodicals, but those are almost unnoticed as computers gain the spotlight.

The Downtown library is open Monday through Saturday, with varying hours.