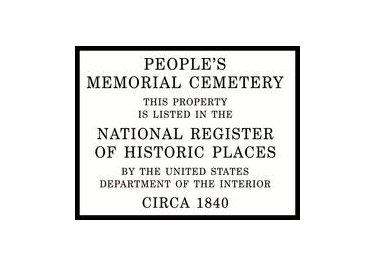 The marker was unveiled last Sunday at the entrance of the 175-year-old African-American burial ground at 334 S. Crater Road.

The cemetery dates to 1840 when “28 members of  Petersburg’s large community of free African Americans  purchased a one-acre tract to serve as a burial ground,” according to the marker.

Additional land was added over time to create what is now known as the People’s Memorial Cemetery.

The cemetery has numerous grave markers “bearing the insignia of mutual aid societies and fraternal orders, reflecting the importance of these organizations to the community,” the marker states.

Those buried there include slaves, a 19th-century member of the Virginia House of Delegates and veterans of the Civil War and other wars through World War II.

The cemetery has been listed on the National Register of Historic Places since 2008.