From the black soldiers who fought in the Revolutionary War to the University of Missouri students and football players of color who learned this week the power of unity and strategic action, the fight by African-Americans for respect and equal treatment in this country has been a long one.

It started long before the icons of the Civil Rights Movement refused to give up their seats on buses (Irene Morgan, Claudette Colvin and Rosa Parks) or were jailed in Birmingham (Fred Shuttlesworth, Ralph Abernathy, Dr. Martin Luther King Jr. et al) and in cities and towns across the South.

And it likely will continue long after the struggles of the current era are added as chapters to the history books.

Veterans Day provides an opportunity to reclaim the history of those whose battles have propelled our progress toward securing the rights held sacrosanct by the nation’s founders and that frame the core of the U.S. Constitution.

Scholars and observers alike believe that the military service of African-Americans throughout history has helped drive individual and group advancement. Veterans who put their lives on the line abroad to protect and defend the United States could not abide the unequal and second-class mistreatment they received when they returned home.

Richmonder L. Douglas Wilder, who became the nation’s first African-American elected governor in 1989 in Virginia, credits his military service during the Korean War with his decision to attend law school and to pursue a political career. He talked about it Tuesday night at the Library of Virginia during a book signing for his new memoir, “Son of Virginia: A Life in America’s Political Arena.”

“Returning home from the war was bittersweet,” Gov. Wilder wrote in the book. “I was alive, but the truth of my circumstances became depressingly clear. I had been called to fight for the freedom of a people when I did not have that same freedom.”

Months after his return, he applied and was accepted to Howard University Law School, graduating in 1959. With his election 10 years later as the first African-American in the Virginia Senate since 1890, he ushered in a 40-year-plus political career that has included gains for the African-American community even as it lifted the entire state.

We urge our readers to rediscover the history of our military past and the authentic stories of the African-American heroes — male and female — whose service has been instrumental in the progress of our race. Among them: The 1st Rhode Island Regiment and Royal Ethiopian Regiment of the Revolutionary War; the 14 Medal of Honor winners from the Battle of New Market Heights just outside of Richmond during the Civil War; the 9th and 10th Cavalry during the Spanish-American War; the 369th Infantry Regiment, nicknamed the “Harlem Hellfighters” during WWI, that, along with African-American soldiers from the 370th, 371st and 372nd regiments, saw action on French battlefields and were awarded France’s prestigious Croix de Guerre and the Distinguished Service Cross for exceptional gallantry in action; the 761st Tank Battalion and the exemplary Tuskegee Airmen of WWII; and the 13 African-American men for whom the Navy has named ships, including the USS Gravely, USS Harmon, USS Brown and USS Miller.

The lessons of the past may illuminate the path toward progress tomorrow. 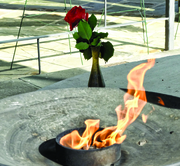 The Torch of Liberty on Veterans Day at the Virginia War Memorial in Downtown.