Thomas Harrison Gee of Lunenburg County served with the 510th Engineer Service Battalion, one of two African-American units from Virginia. He worked primarily on construction projects, such as building roads, tunnels and septic tanks for base hospitals. After the war, he farmed in Lunenburg County. Library of Virginia Photo and Digital Imaging Services 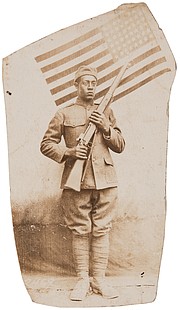 Left, Harvey Elm Braxton of Accomack County served in Company A, 808th Pioneer Infantry and participated in the Meuse-Argonne Offensive, a major part of the final Allied offensive in WWI. After the war, he returned to Accomack County and worked on his father’s farm.

No word better describes the larger than life photographs of 20 African-American soldiers assembled in the “True Sons of Freedom” exhibition at the Library of Virginia in Downtown.

Although the uniformed figures posed for their portraits 100 years ago, they still meet our eyes with heart-tugging immediacy. The original photographs were pocket-size, taken in makeshift studios to send to family members and sweethearts back home. The soldiers have various expressions — confident, humorous and sometimes challenging.

The State Library’s small but powerful show commemorates the centennial anniversary of America’s involvement in World War I (1917-1918) and, more specifically, celebrates the role of black Virginians in that global conflict. The photos are part of a larger archive of first-person reports collected in the 1920s by the Virginia War History Commission to document the commonwealth’s participation in the Great War.

When President Woodrow Wilson and the U.S. Congress declared war against Germany in April 1917, they committed American troops to a brutal struggle that already had raged for three years. The European combatants were bogged down in a stalemate along the Western Front, a 475-mile network of trenches and barbed wire. The American forces would enter a horrific arena of warfare that introduced tanks, aerial bombing and poison gas.

Ultimately, the United States mobilized 4 million men; 370,000 African-American soldiers and sailors entered the fight, with roughly 42,000 of them engaging in combat.

The call for service came at a time when African-Americans were enduring what some scholars identify as the nadir in race relations. Southern states had disenfranchised black voters and had begun passing strict segregation laws. White supremacy was further enforced through assault and murder at the hands of vigilante lynch mobs and a reconstituted Ku Klux Klan.

Virginians responded quickly to the call to arms. In 1918, state draftees numbered close to 61,000 men. African-Americans made up 39 percent of the total — close to 24,000 troops. They, like the rest of the nation’s black recruits, were assigned to segregated units. The great majority were shuttled into noncombatant duties as laborers, mechanics, carpenters, stevedores and drivers.

A small segment from Virginia was transferred to the Army’s two all-black combat divisions, which fought with distinction under French command. Portsmouth native Christopher Columbus Watts documented his service with the famed 369th Infantry regiment, popularly known as the “Harlem Hellfighters.” After five months at the front, he returned home disabled from a gas attack and frozen feet. Later, for the war commission survey, Mr. Watts reflected, “I think the Negro deserves much credit for what he has done. ... There are no separations of race in war ... all men are the same.”

Of the state’s 3,700 war dead, approximately 600 black Virginians gave their lives — most of them from disease (the military was ravaged by a global flu pandemic). Nearly 100 were killed in action or died from battle wounds. Among them was Lt. Urbane Bass, a Richmond native who established his medical practice in Fredericksburg before the war. The Army field doctor was fatally wounded by an artillery shell while treating the wounded.

The Great War ended with a ceasefire agreement on Nov. 11, 1918. The following spring and summer, American troops returned to the United States to joyous homecoming parades. Nonetheless, Virginia’s entrenched segregation mandated that black soldiers march on different days and along different routes from their white comrades.

George H. Ben Johnson, editorial cartoonist for the Richmond Planet, found such pageantry meaningless. On June 21, 1919, he depicted an African-American soldier saluting a personification of Virginia. He implores her: “Don’t Camouflage with Drills. No, No!! Cut out the flags and the hurrahs. Abolish the Jim Crow laws. ... Do something of consequence for us.”

That same day, race riots broke out in Norfolk. It was one of several bloody uprisings across the country that marked the “Red Summer” of 1919.

In an essay for The Crisis magazine that spring, Mr. Du Bois urged the thousands of black veterans to marshal every ounce of “brain and brawn to fight a sterner, longer, more unbending battle against the forces of hell in our own land.” He concluded:

We return from fighting.

Through new avenues of consciousness, service and determination, veterans of the Great War helped launch America’s modern Civil Rights Movement. Men like those pictured in the Library of Virginia’s exhibit helped inspire the next generation to bring it to fruition.

“True Sons of Freedom” is on view through Friday, Nov. 9, at the Library of Virginia, 800 E. Broad St. The exhibit is free and can be viewed during the library’s hours 9 a.m. to 5 p.m. Monday through Saturday. Log on to see photographs and learn more about Virginia’s black WWI soldiers: http://truesons.virginiamemory.com.

The writer is a community historian and retired associate curator of American art at the Virginia Museum of Fine Arts.