North Side man surprised to find his portrait in library exhibit 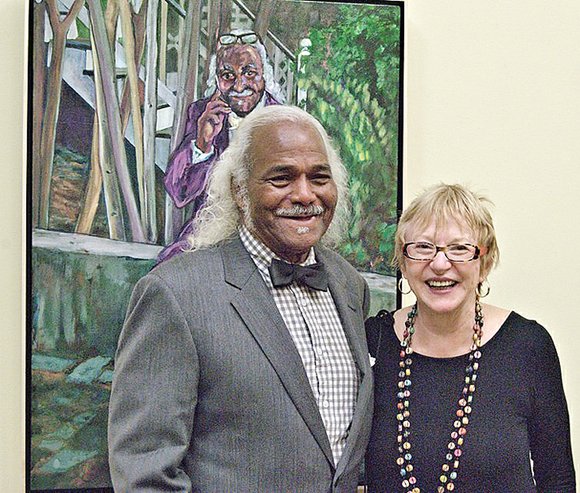 The Rev. Robert W. Oliver’s jaw dropped and his eyes lit up with delight when he walked into the Richmond Public Library’s Gellman Room in Downtown.

People were gazing at an oil portrait of a man with a warm, gentle gaze and long, flowing white hair wearing a purple tuxedo sitting outside with a can of paint at his feet.

Rev. Oliver, an 81-year-old North Side resident, instantly recognized the man on the canvas as himself.

“It was just awesome. It was an amazing feeling,” Rev. Oliver told the Free Press about the painting following an opening reception Nov. 6 at the library’s Main Branch.

He had no idea the painting existed. It was done by Richmond artist Judy Holloway and is included in an exhibit of her work, “Meditations on Community,” at the library.

The exhibit is on view through Tuesday, Dec. 1.

The painting of Rev. Oliver is called “Man in Tux.” Ms. Holloway painted the portrait from a photograph that a friend, Mary Field, had taken of Rev. Oliver in August 2014.

Ms. Field, who didn’t know her subject, photographed Rev. Oliver when he was outside the Church Hill home of his daughter, Robin O. Hill, when her home was being painted.

A friend of the Oliver family recognized Rev. Oliver when she saw a copy of the painting on an invitation to the exhibit’s opening reception. She notified Mrs. Hill and her sister, Tracey Oliver, vice president for administration at the Richmond Free Press.

The sisters concocted a story to get Rev. Oliver to the library for the exhibit’s opening.

Rev. Oliver, known by many as an ambassador of goodwill in the community, said he typically doesn’t allow people to photograph him, but is happy he did after he saw the portrait.