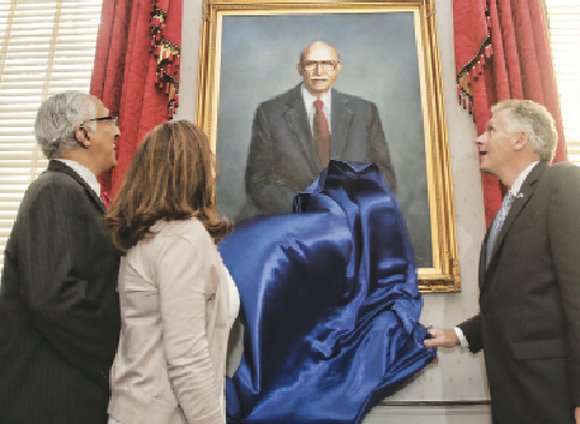 Gov. Terry McAuliffe, right, and his wife, Dorothy McAuliffe, are joined by Oliver W. Hill Jr., as they unveil a portrait of his father, legendary civil rights attorney Oliver W. Hill, at the Executive Mansion. Photo by Sandra Sellars

Oliver W. Hill used the law to battle segregation and to promote justice and equality in Virginia in schools, in the workplace, the courthouse and a host of other areas.

Now the portrait of the civil rights giant graces a spot in the Executive Mansion — one of the first African-Americans to be showcased in the house where Virginia governors have lived since 1813.

The governor said after his family moved into the mansion, the couple immediately noticed a lack of diversity in the portraits hanging in the various rooms. Their first step was to hang a painting of an African-American worker.

This was the second step — and appropriate, the governor and his wife said.

During the administration of Gov. Mark R. Warner, the Old Finance Building on Capitol Square was named for Mr. Hill, the first African-American to be so honored. The building houses the offices of the lieutenant governor, the state Agriculture Department and the state Compensation Board.

Tuesday’s ceremony unveiling Mr. Hill’s portrait at the mansion was held just hours after Gov. McAuliffe took several actions that he felt would have pleased Mr. Hill, including banning the Confederate flag from Virginia license plates and making it easier for felons to get their rights restored.

During the ceremony, Dr. Hill helped the governor remove the blue cloth that covered his father’s portrait. He said the inclusion of his father’s portrait fit with Mr. Hill’s philosophy that “we are all human earthlings” and must work to end racial and other divisions that prevent people from working together.

Before the ceremony, Dr. Hill said the first couple’s decision to put up a portrait of his famous father “came out of the blue.”

The portrait, completed in 2003 by Richmond artist Elaine Blankston, is on loan from the University of Richmond School of Law. It was commissioned by UR’s Black Law Students Association and has hung in the school’s rotunda for 12 years.

Now graduates with legal careers, Reis Alsberry and Thor Hoyte led the BLSA effort that raised nearly $2,000 to cover the cost. Mr. Alsberry, who was at the ceremony, said he and the other students were encouraged by UR law professor Jonathan K. Stubbs, a biographer of Mr. Hill, to help properly honor Mr. Hill with a portrait. Mr. Hill attended the original unveiling back in 2003, Mr. Alsberry said.

The portrait will remain on view at the mansion at least until January 2018, when the governor’s term will end.

Mr. Browne, who attended the unveiling, expressed disappointment that his portrait of Mr. Hill was not the choice. He said his painting is the only one Mr. Hill ever sat for.

He said he was told the mansion’s staff was apparently unaware of his work when they began their search to find an appropriate portrait.