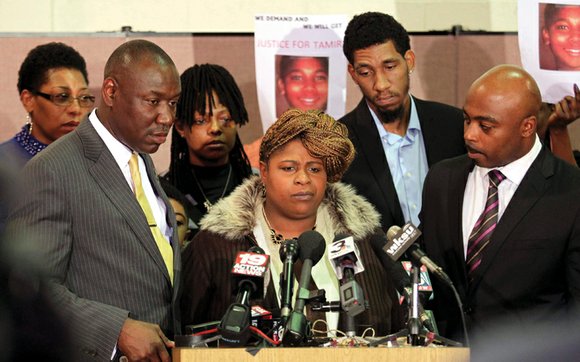 Samaria Rice, center, the mother of 12-year-old Tamir Rice, speaks during a December 2014 news conference about her son, who was shot and killed by Cleveland police while playing in a park. With Mrs. Rice are attorney Benjamin Crump, left; Tamir’s father, Leonard Warner, second from right; and attorney Walter Madison, right. Aaron Josefczyk/Reuters

Cleveland officials have agreed to pay $6 million to settle a lawsuit filed by the family of Tamir Rice, a 12-year-old who was shot and killed by a police officer in 2014, according to documents filed in federal court on Monday.

The city admitted no wrongdoing in the shooting and Tamir’s family agreed to drop the complaint against two officers, including the one who shot the child, U.S. District Judge Dan Aaron Polster, who mediated the settlement, said in the documents.

Tamir was shot in a local park by Timothy Loehmann after he and another officer, Frank Garmback, responded to reports of a suspect with a gun. An investigation revealed that Tamir, who died a day after the shooting, had been seen holding a pellet gun.

The shooting was one of several that have fueled scrutiny of police use of deadly force, particularly against minorities.

“Although historic in financial terms, no amount of money can adequately compensate for the loss of a life,” Subodh Chandra, the Rice family’s attorney, said in response to the reported settlement.

“It is the Rice family’s sincere hope that Tamir’s death will stimulate a movement for genuine change in our society and our nation’s policing,” he added.

Cleveland Mayor Frank Jackson said at a news conference he would not elaborate on the settlement or how the city would pay for it. “There is no price you can put on the loss of a 12-year-old child.”

The two officers have been on restricted duty since the shooting and will remain so through an internal police review.

“The web of laws and practices that prevent accountability for police misconduct needs to be taken apart and replaced with concrete solutions to eliminate racial bias in the justice system,” Christine Link, executive director of the ACLU’s Ohio chapter, said in a statement.

Tamir’s family filed its lawsuit against Cleveland and the officers two weeks after the shooting. They had also demanded the officers be charged, a special prosecutor handle the case and the U.S. Justice Department investigate.

In December, a grand jury declined to bring criminal charges against the officers.

Under settlement terms, which must be approved by a probate judge, Tamir’s estate will receive $5.5 million and his mother, Samaria, and his sister each will receive another $250,000, the documents said.