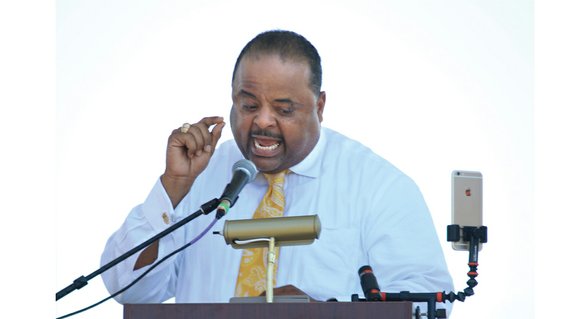 A blistering August sun did not deter guests from attending a special outdoor ceremony last Saturday at Fort Monroe in Hampton. The event, staged to remember the 1619 arrival of the first 20 Africans to America, was held on the fort grounds near the site of the first arrival.

The ceremony was organized by American Evolution as part of an ongoing national project that will culminate in 2019, the 400th anniversary of the historic events in Virginia that were significant in shaping the principles and values of the United States.

The year 1619 marked the arrival of the first 20 Africans and the impact of subsequent generations of Africans and, later, African-Americans in shaping the nation’s economy and culture; the impact of the native American population on the English settlers; and the first meeting of a “General Assembly” by the settlers to establish a way to govern themselves.

Mr. Martin, host of TV One’s “News One Now,” spoke frankly about the horrific impact of American slavery that left black people suffering to recover even to the present.

Although the first 20 Africans were involuntary servants who were to be freed after working for a period of time, by 1624, the value and efficiency of black people as forced laborers had been recognized, with Africans imported to America as permanent slaves.

“There is a song that says, ‘Woke up this morning with my mind stayed on freedom,’ ” Mr. Martin said. For black people in America, he continued, “waking up everyday is unlike any other immigrant group.”

Mr. Martin said Americans have learned “his” story and not the real history of how centuries of enslavement shaped black people, the unpaid and forced labor that allowed for the creation of American capitalism.

“It wasn’t great if you were in chains,” he said.

“You must understand that what took place in 1619 affects today … to unpack that notion of (black people) today being finally free.

Mr. Martin, a resident of Northern Virginia, took to task Virginia legislators who continually thwart efforts to restore voting rights to felons, a significant number of whom are African-Americans who have served their time and paid their fines.

“When you serve your time, you should get your right to vote back,” he said. “There should be a desire of people of conscience in 2016 to ensure freedom, to do what’s right.”

Mr. Martin said black Americans have lived with “the challenge to have courage to keep living under an oppressive system and still put on a uniform, still fight for America.”

“Black folk made America,” he said. “When America didn’t love us, we loved America.”

Mr. Martin said the day’s observance of the first arrival of Africans should be viewed “not as a commemoration, not a celebration, but a remembering.”

“Our challenge is to develop as a people of conscience who will join on the battleground of freedom for the invisible struggles we can’t talk about. If I see an injustice, I am going to do something about it. Public policy should reflect that — just do it.”

In his remarks following Mr. Martin, Gov. McAuliffe said “we must remember our history to right the wrongs of the past.”

He spoke of the need for ongoing dialogue on how to live as Virginians and Americans and on ensuring the history of Virginia’s role in the making of America.

Gov. McAuliffe ordered a cannon blast from 1619 Godspeed, a replica of the early ship sailing in Hampton Roads alongside the gathering.

During the next four years, the 2019 American Evolution Project is planning eight signature events around three American values that were birthed in 1619: Democracy, diversity and opportunity.

Other weekend events included dedication of a marker for the William Tucker family cemetery where descendants of the first child of African descent born in America are buried.