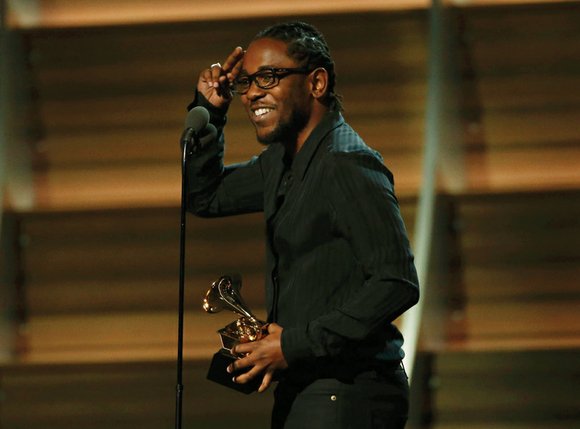 Kendrick Lamar accepts the award for best rap album for “To Pimp a Butterfly” Monday night at the 58th Grammy Awards. Mario Anzuoni/Reuters

Hip-hop ruled the stage Monday night at the Grammy Awards in performances that put racial tension back in the national spotlight and where some of music’s biggest stars failed to deliver, or in the case of Rihanna, failed to show up at all.

Rapper Kendrick Lamar went into the awards with 11 nominations and looked to be on course to win album of the year for his critically acclaimed “To Pimp a Butterfly.” While he led Grammy winners with five wins, he lost album of the year to country-turned-pop artist Taylor Swift, who won with “1989,” the best selling album of 2014.

“I’m African-American, I’m African, I’m black as the moon, heritage of a small village, pardon my residence, came from the bottom of mankind,” rapped Mr. Lamar, 28, who hails from Compton, Calif.

His performance ended with a backdrop of a large map of Africa with the name Compton written across it.

Eric Deggans of National Public Radio called it “a performance that woke up a sleepy #Grammys” and entertainment website E! Online tweeted that “Kendrick Lamar just SHUT. IT. DOWN. at the Grammys.”

Lady Gaga brought the audience at the Staples Center to its feet with a psychedelic tribute to David Bowie, who died in January.

Rihanna pulled out at the last minute with bronchitis, disappointing fans watching at home who complained the 2016 Grammys lacked star power.

Beyonce later made the briefest of appearances to present an award at the end of the 3½-hour show, but did not perform.