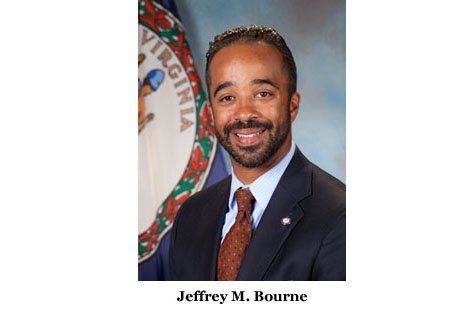 “I think we are at a critical time at our tenure and at a critical juncture in making progress in Richmond Public Schools. I felt compelled to continue the progress that we have made.”

Jeffrey M. Bourne, 3rd District, told the Free Press on Tuesday that’s why he agreed to serve as chair of the Richmond School Board.

It will be Mr. Bourne’s second time as chair. He served at the helm of the board in 2013.

Mr. Bourne, 39, is a deputy attorney general, married with two children, the older of whom is enrolled in Richmond Public Schools. He was nominated for the position at Monday’s board meeting by outgoing chair Donald Coleman, 7th District. Outgoing Vice Chair Kristen Larson, 4th District, then nominated Mr. Coleman as vice chair.

Before the votes were cast, Ms. Taylor proposed instituting a policy whereby the vice chair position would rotate among board members over the course of the year, but the board declined to back the plan.

The two men are scheduled to serve in their positions until Dec. 31, 2016, when the newly elected board will select its leaders.

“I’m absolutely excited,” said Mr. Coleman, who served two terms as chair after Mr. Bourne. Mr. Coleman, a Richmond minister, was board vice chair during Mr. Bourne’s first term. “I believe he’s the right person for this time,” he added.

Mr. Bourne, who serves as a deputy attorney general in the office of Virginia Attorney General Mark R. Herring, said he hopes to lead the board by “continuing to strengthen our academic plans and offerings for our students.

“In addition to that, I’d like for us to address some of the operational things that drain our resources,” added Mr. Bourne, who has hinted at a run for mayor this year. “I’d also like for us to find ways to decrease the too-high number of expulsions and suspensions we have. And, I’d like to increase our career and tech-ed offerings.”

In his new role, Mr. Bourne also said he would seek to “balance thoughtful discussion and debate about an issue with our needs to address problems with a great sense of urgency.”

Mr. Bourne will lead the board as it enters a challenging budget cycle that is sure to include serious discussions over how to best allocate the city’s scarce financial resources.

RPS Superintendent Dana T. Bedden has proposed an ambitious $298 million budget that includes an $8.7 million compensation plan that would increase pay for teachers and other school staff, reflecting their years of employment with the district.

Mr. Bourne reflected the realities of the budget constraints when he concluded, “I think it’s going to be another tight year for Richmond Public Schools. But, the School Board is going to put its fingerprints on the superintendent’s statement of needs and prioritize our students and teachers by doing so.”