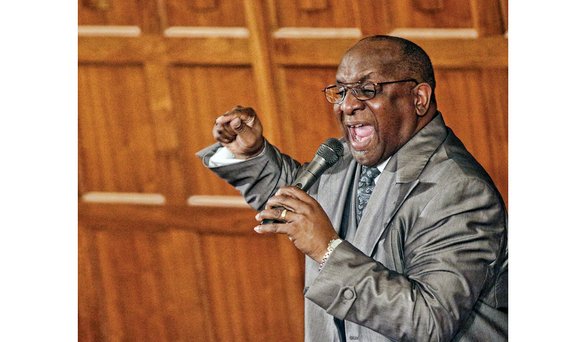 “I came to help keep his memory and his dream alive. This is the least I can do after what he did for us,” said Barbara Moon after attending the 38th Annual Mass Meeting on Monday that honored the life and legacy of Dr. Martin Luther King Jr.

The retired Richmond Public Schools teacher was among a few hundred people who braved sub-freezing temperatures to attend the inspiring community gathering at Cedar Street Baptist Church of God in the East End on the national holiday honoring Dr. King.

The predominately youth-led event featured inspiring music and a stirring message from Dr. Alvin Edwards, a former mayor of Charlottesville who is the pastor of Mount Zion First African Baptist Church in that city.

Dr. Edwards drew his message from the biblical story of Joshua in which God instructs Joshua following Moses’ death to take the Israelites into the Promised Land, promising “I will be with you; I will never leave you nor forsake you.”

“The question that haunts me is what has happened to the dream and dreamers today?” he asked.

He called on the audience to become involved in their homes, jobs, communities and schools “to make them better places.”

Dr. Edwards said present-day dreamers should seek solutions to alleviate poverty, work to reform a discriminatory criminal justice system, help those addicted to drugs and alcohol, advocate for educational equity and seek racial unity “where we care about one another.”

In brief remarks, Dr. Cheryl Ivey Green, executive assistant to Mayor Dwight C. Jones and executive minister at First Baptist Church of South Richmond, encouraged attendees to bring more young people to events like the Mass Meeting so that they can understand “that somebody went through some fire hoses, some folks were killed and some folks were fighting just so we could have a right to vote.

She cited the mayor’s efforts to alleviate poverty through the Office of Community Wealth Building that is designed to implement poverty-fighting initiatives and the Center for Workforce Development that provides job training.

Several young people also distinguished themselves serving in leadership roles at the event.

All three were contestants in the 2015 Miss Unity Pageant sponsored by the faith group Sisters United of Richmond, which awards scholarships to students. Taylore Harris was the pageant winner.

Performing at the event were 11-year-old twins Paris and Endya Burton of Chesterfield County and their cousin, 10-year-old Jacqueline Dobbins of Richmond, known as “3T Diamonds,” who sang Ron Kenoly’s “If You Can Use Anything, Lord,” and Destiny’s Child’s “Stand Up For Love.”

Later, Quincy Harmon,15, on the keyboards and his 13-year-old brother, Malcolm, playing the drums, performed instrumental versions of Pastor Charles Jenkins’ “My God Is Awesome” and Tamela Mann’s “Take Me to the King.”

The Mass Meeting was organized by Living the Dream Inc., led by its executive director, the Rev. Ricardo Brown of Fifth Baptist Church in the West End.