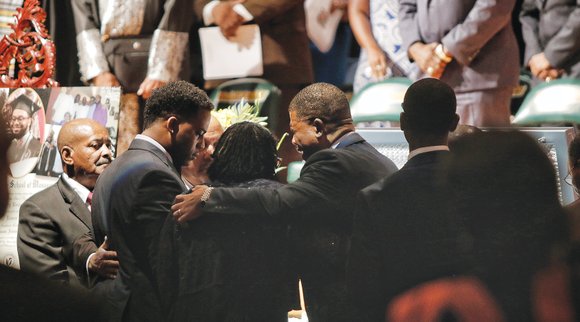 Friends remember Darryl “DJ” Burt II at his funeral Saturday. From left, they are Fred Johnson, Antwine Jenkins, Javád Whigfall and Alex Barr. The four men were at the nightclub when he was killed in the June 12 massacre at Pulse in Orlando, Fla. Photo by Sandra Sellars

As the 29-year-old drove, he played the gospel song “Safe in His Arms” over and over.

He had a feeling, he told Alex Barr, a college friend who was making his way to Pulse nightclub from Savannah, Ga., to join the celebration. He seemingly knew that “his work here was coming to a close — that his work and labor were finally being fulfilled,” Mr. Barr said.

“He said, ‘I can’t shake this feeling,’ ” Mr. Barr told the 300 family members, friends and other mourners last Saturday at Mr. Burt’s funeral in Amelia County, where his family has ties.

Mr. Burt was among the 49 people killed June 12 at the nightclub during a gunman’s hourlong rampage, the nation’s worst mass murder in modern history. More than 50 people were wounded during the bloody nightmare before the shooter was killed by police.

As Mr. Barr spoke about the friend he’d met when they were freshmen honors students at Claflin University in Orangeburg, S.C., he was flanked by Fred Johnson, Javád Whigfall and Antwine Jenkins, the three other friends who joined them at the club.

Although Mr. Barr, also 29, made no direct references to the massacre during the service, he later spoke about it in detail during a Free Press telephone interview.

After celebrating his graduation with his parents, Darryl and Felica Burt, and his younger brother, Roger, Mr. Burt wanted to celebrate with his friends. They decided to drive to Pulse, a popular gay nightclub.

“We got there late. We were pretty tired,” said Mr. Barr.

“DJ and Javad went to get drinks. I sat down. We floated and three of us went to the left side where R&B music was playing,” he said. “DJ was at the bar and turned to make sure everyone was OK.”

A little while later, just after the bartender made the last call for alcohol, Mr. Barr said he heard shots.

“We thought maybe two people were having an argument. Then we knew someone was shooting on purpose. We immediately retreated from the room,” he said.

Mr. Barr, Mr. Whigfall and Mr. Jenkins headed for what they thought was an exit, but found a dead-end wall instead. They then went into the men’s bathroom, ending up huddled in a stall for the disabled with about 15 people. Five had been shot and killed by the gunman.

Inside the stall, they started texting one another. Mr. Burt responded that he was still inside the club and the men later learned, via text, that Mr. Johnson, who had been shot in his left arm and hip, was outside.

After a while, they noticed Mr. Burt was no longer responding to their texts.