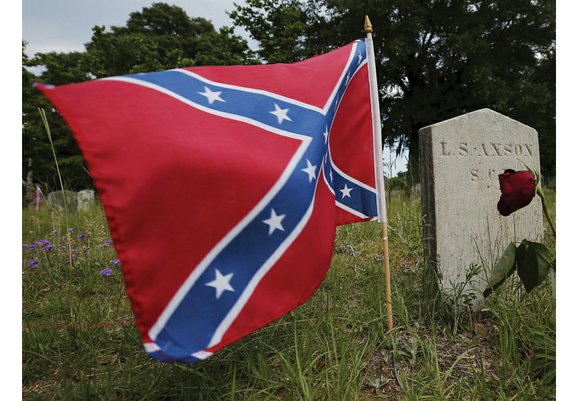 A Confederate battle flag flies at the grave of L.S. Axson, a Confederate soldier buried in Magnolia Cemetery in Charleston, S.C. Brian Snyder/Reuters

The nation’s second largest Presbyterian denomination has passed legislation repenting for “past failures to love brothers and sisters from minority cultures” and committing its members to work toward racial reconciliation.

The “overture,” or legislation, was approved overwhelmingly Thursday, June 23, at the national meeting of the Presbyterian Church in America. The issue had been deferred from the previous year’s meeting, where there was a lengthy debate on similar legislation.

The vote by the PCA came in the same month that Southern Baptists attending their annual meeting adopted a resolution repudiating the use of the Confederate flag.

“The 44th General Assembly of the Presbyterian Church in America does recognize, confess, condemn and repent of corporate and historical sins, including those committed during the Civil Rights era, and continuing racial sins of ourselves and our fathers such as the segregation of worshipers by race; the exclusion of persons from Church membership on the basis of race,” reads the PCA legislation.

The PCA also acknowledged teaching that the Bible permits racial segregation and discourages interracial marriage, and the denomination confessed to defense of and participation in white supremacist organizations.

Richard Doster, editor of the PCA’s byFaith magazine and a spokesman for the General Assembly, said 43 of the 63 proposed pieces of legislation for the meeting, which took place June 20 through 24 in Mobile, Ala., related to race relations and confessions of sin about segregation.

“It is highly unusual,” he said. “This is the first time something like that has happened, especially on that topic.”

Delegates also passed, by a vote of 814-87, legislation calling for the appointment of a multiethnic study committee to develop concrete steps toward racial reconciliation that can be taken by leaders of churches and presbyteries, or regional groups of churches.

Earlier in June, the Southern Baptist Convention, which was born in 1845 in a split over its support for slavery, passed a resolution calling for Christians to quit using the Confederate flag.

“We call our brothers and sisters in Christ to discontinue the display of the Confederate battle flag as a sign of solidarity of the whole Body of Christ, including our African-American brothers and sisters,” stated the resolution adopted June 14 at the Southern Baptist Convention’s annual meeting in St. Louis.

Former Southern Baptist President James Merritt, who said he was the great-great-grandson of two Confederate Army members, helped draft that language, which included striking a paragraph that linked the flag to Southern heritage.

“The Southern Baptist Convention made history today and made history in the right way,” said Mr. Moore, president of the SBC’s Ethics and Religious Liberty Commission. “This denomination was founded by people who wrongly defended the sin of human slavery. Today, the nation’s largest Protestant denomination voted to repudiate the Confederate battle flag and it’s time and well past time.”

Some of the Southern Baptists at the meeting were upset with the resolution, and Paul Pressler, a retired judge from Texas and an architect of the conservative resurgence in the denomination more than 30 years ago, complained that he was not allowed to speak. Officials said time ran out before he could.

The 2016 resolution language is a sharp contrast from the denomination’s support of the Confederacy that was cited in an 1863 resolution, in the midst of the Civil War: “(W)e have no thought of ever yielding, but will render a hearty support to the Confederate Government in all constitutional measures to secure our independence.”

Mr. Merritt said the new resolution was not about political correctness but more about a proper Christian witness.

“This flag is a stumbling block to many African-American souls to our witness,” he said. “And I rise to say that all the Confederate flags in the world are not worth one soul of any race.”