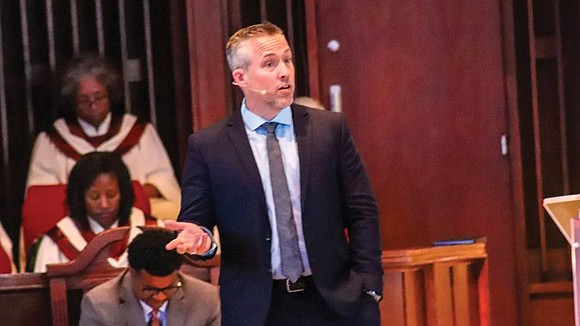 Speaking at a black church last Sunday in a city that is nearly 75 percent African-American, the president of the Southern Baptist Convention, Dr. J.D. Greear, said white Christians who are racially insensitive are disregarding the gospel.

“I do not need to tell this church the church of the West has had a horrible history of racism,” Dr. Greear, a pastor in North Carolina, told Sixth Avenue Baptist Church.

“And there’s one primary reason that that happened: Christians lost touch with the gospel.”

Dr. Greear, who had come to Birmingham for the upcoming annual meeting of the Southern Baptist Convention, cited a verse from the New Testament book of Galatians in which he said the Apostle Paul issued a rebuke about “segregated eating” when some Christians from Jewish backgrounds stopped dining with Christians from Gentile backgrounds.

“The gospel teaches us that there’s only one kind of person — human,” Dr. Greear said. “We’ve all got the same problem — sin.”

As some 8,000 Southern Baptists arrive in a city once called by experts “the most segregated in the country,” Dr. Greear expressed hope that Southern Baptists also may amend their constitution to remove churches that affirm racially discriminatory behavior.

“I’m praying that even with our past history on it, that Birmingham for us this year will be a big step forward in the hope and the healing,” Dr. Greear said in an interview following the church service.

In his 40-minute sermon, Dr. Greear preached that Jesus was an equal-opportunity savior.

His statement drew applause from a crowd of nearly 1,000 visiting Southern Baptists.

Sixth Avenue Baptist has a long history of involvement in the Civil Rights Movement. Dr. Martin Luther King Jr. preached from its pulpit more than once, most notably at the funeral of three of the four little girls killed in the 1963 bombing of Sixteenth Street Baptist Church.

Dr. Greear said he also visited the Birmingham Civil Rights Institute and traveled to Montgomery, Ala., to view the year-old National Memorial for Peace and Justice, which displays the names of thousands of African-Americans who were lynched from the mid-1800s to the mid-1900s.

After the service, Senior Pastor John L. Cantelow III said he thought it was significant that Dr. Greear made efforts to visit and learn about aspects of the country’s racial history while he was in Alabama.

“That represents his desire, his interest to bring the body of Christ together,” Dr. Cantelow said. “That’s a positive, I think, move forward.”