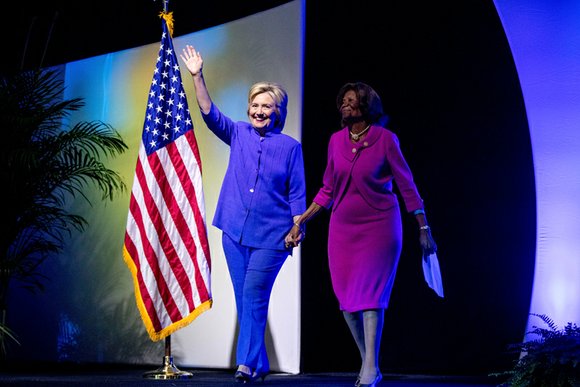 An estimated 10,000 delegates from throughout the country converged on Cincinnati for the national NAACP’s 107th annual convention here that began last Saturday.

With the theme, “Our Lives Matter: Our Votes Count,” many of the conference’s keynote programs and speakers, which included Hillary Clinton and Ohio Gov. John Kasich, largely focused on America’s growing violence.

Before the conference’s end on Wednesday,

the nation’s oldest civil rights organization took up other critical issues, including attempts to dismantle the federal Voting Rights Act, inequities in the criminal justice system, health disparities and the environment, education and economic opportunity.

While many of those issues were discussed, the recent shooting deaths of black men in Ba- ton Rouge, La., and Minnesota by police and the killing of a total of eight police officers by black men in Dallas and Baton Rouge took center stage.

Mrs. Clinton, the presumptive Democratic presidential candidate in the Nov. 8 election, promised in her remarks to convention attendees Monday to bring the “full weight of the law” against people who kill police officers if she becomes the next president.

“Anyone who kills a police officer and anyone who helps must be held accountable,” Mrs. Clinton said. “As president, I will bring the full weight of the law to bear to make sure those who kill police officers are brought to justice.”

The penalties for killing a police officer are rightly more severe than those for killing a civilian because police are symbols of the rule of law, she said.

Mrs. Clinton’s remarks came amid heightened tensions between police forces and many black and Latino Americans, who have been rallying in protests across the country against a spate of police killings of black men, often unarmed, during encounters.

The police killings followed the recent shoot- ing deaths of two black men shortly after the July 4 holiday. On July 5, Alton Sterling, 37, was killed by police outside a Baton Rouge, La. convenience store. A day later, July 6, Philando Castile was killed by police after being pulled over in Falcon Heights, Minn., a suburb of St. Paul.

“The violence to which black people are be- ing subjected is devastating,” Ms. Brock stated. “We have witnessed in recent years and recent days horrendous testimony and documented evidence of unarmed people of color being hunted

and injured and murdered by law enforcement personnel with little or no accountability for these violations of civil rights and desecrations of human rights. There must be accountability. And there must be radical change in the way we do policing.”

Adding that while she does not minimize the work of the police, Ms. Brock said there must be a demand for “police forces that reflect our communities and police who live amongst us and work with us to make our neighborhoods safer. We also demand an end to the outrageously disproportionate arrests of black people for crimes like marijuana posses- sion and having a broken taillight for which white people are almost never prosecuted. It is exhausting dealing on a daily basis with such blatant, petty injustices.”

In a speech sprinkled with biblical reference on Sunday, Gov. Kasich condemned the slayings of police officers while urging that people work together for healing.

The Republican said he learned just before taking the stage Sunday evening of the shooting of a police officer in Milwaukee. That officer was seriously wounded, police said.

He described his initiative for a statewide collaborative effort in Ohio on police-community relations. The bipartisan special board, which grew from a series of police shootings of African-Americans in the state, has been working on statewide policy for use of deadly force, improving recruiting of police to reflect more community diversity, developing data collection, and improving police-community understanding from both sides.