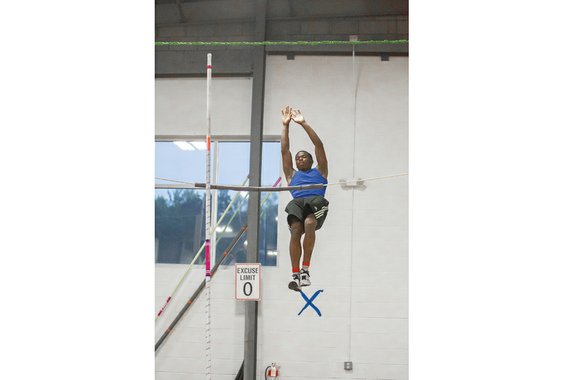 As a younger athlete, Chris St. Helen tried his luck at basketball, football and long-distance running, and he was average.

Then he discovered the pole vault and he was average no more.

From then on, it has been up, up and away.

The Highland Springs High School junior with Caribbean-born parents has taken off, literally, into the wild blue yonder as the springiest Springer of all time. 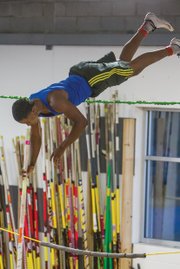 St. Helen won both the indoor and outdoor 6A State titles as a sophomore.

Steadily, he has pushed the crossbar bar higher and higher — from a best of 12-6 as a freshman, to 14-6 last year, obliterating the school record. He’s now at 15-plus.

“I want to clear 17 feet before I’m finished” high school, he said confidently.

And after high school?

“I want to continue vaulting at one of the service academies — either Navy or the Air Force,” he said.

St. Helen flies high in the classroom, too, with a 3.85 overall GPA in all college-bound courses.

His background can be read with a calypso beat. 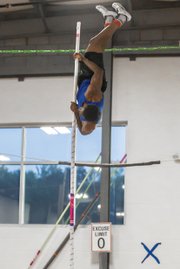 He is son of Neil and Tricia St. Helen, who both came to Richmond with their families from the Caribbean. His father, a truck driver and mechanic, hails from the Virgin Islands.

“I love working on cars — and driving them,” he said, referring to his smooth ride, a glistening 1997 Pontiac Grand Prix GT with “Got PV?” bumper sticker.

His mother, who works at UPS, hails from Trinidad & Tobago.

Growing up in Eastern Henrico County, Chris signed up for basketball and football.

“I was just average,” he recalled.

“It didn’t look like I would go far and, worse, it wasn’t any fun,” he said. “I began watching the vaulters. It was eye catching.”

That’s when Coach Bishop, who is one of the state’s vaulting gurus, came into sharp focus.

With great success, Coach Bishop has coached a large chuck of the area’s elite vaulters for some 30 years. The mentoring began in Coach Bishop’s backyard in Mechanicsville. Now his Aim High Vault Club has a home with a roof at Aerial East Gymnastics off Pole Green Road in Hanover County.

St. Helen trains alongside some of Virginia’s top vaulters, including Griffin Kowalt from New Kent, who has sailed 15-7 in Division 3A.