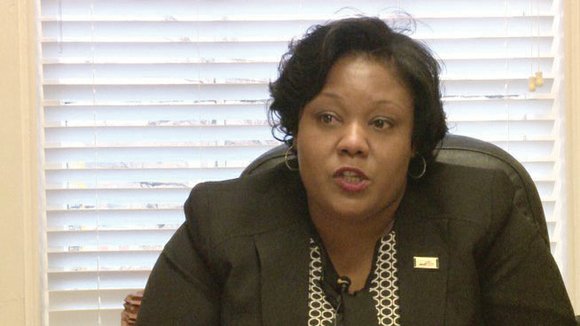 Amid crumbling finances, the City of Petersburg has shaken up its government leadership.

The shuffle is the City Council’s latest effort to deal with millions of dollars in unpaid bills, a multimillion-dollar revenue shortfall and a malfunctioning water billing system.

At the same time, the council named Dironna Moore Belton, general manager of Petersburg Area Transit, to run day-to-day operations until a new city manager is hired, although no timetable has been announced for when that might happen.

The 38-year-old Petersburg native, who essentially is auditioning for the top management post, was installed as interim chief operating officer, bypassing Deputy City Manager Irvin Carter Jr., who supervises six city departments and is a former budget manager for Richmond.

In her acceptance statement, Ms. Belton promised to bring a plan of action to the council within 30 days that would put the majority-black city on track to cope with its financial woes.

“I will review the procedures and operations of all city departments and outline in a report measurable objectives to council that will aim to cut costs, create revenue and increase how far actual tax dollars will go,” she stated.

She also promised to improve the “dialogue between the council and staff, as well as how the organization communicates with its residents,” and create a more accountable city government.

“We will work hard until we have the full trust of all citizens back,” she said.

Ms. Belton will report to the new executive triumvirate, the mayor and his two colleagues, Vice Mayor Samuel Parham, Ward 3, and John A. Hart Sr., Ward 7.

Mayor Myers issued a statement on Facebook that “we have a long road before us” to achieve a turnaround.

He wrote that solving the city’s problems would require sacrifice.

“We will sacrifice for our city together, but we all must do our part … to overcome our obstacles. It’s not going to be easy, and there are those who will not allow it to be easy, but we are a resilient city.”

Separately, the council accepted the resignation of City Attorney Brian K. Telfair, the only in-house counsel for a Virginia locality to be included among Virginia Business Magazine’s 2015 “Legal Elite.”

Mr. Telfair said he would stay on until his successor is appointed.

His resignation came as he began to take on energy and industrial giant Johnson Controls Inc., which he blames for creating some of the city’s financial chaos.

In the past two years, JCI installed new automated water meters to replace the city’s outdated meters. However the system that was accepted by the city apparently has never worked properly, leaving many residents with inflated bills or no bills.

Mr. Telfair is demanding the company resolve the multiple problems he has found with the meter installation.

The problems in billing left citizens outraged and compounded Petersburg’s money woes that have cropped up despite the spurt of public and private developments that has helped improve the city’s image.

Recently, City Council was shocked to learn that the city had $7 million in outstanding IOUs for such items as city employee pensions and payments due to regional wastewater and jail operations.

At the same time, some residents stopped paying personal property taxes on cars and other vehicles, reducing city revenue this year by $3.5 million below its budget. At the same time, spending soared $1.8 million over budget.

Before he was dismissed March 3, Mr. Johnson ordered a 4 percent across-the-board spending cut to try to bring revenues and expenditures into balance.

Mr. Johnson was removed for cause, according to the council’s vote, which would make him ineligible for a severance package for his nearly five years as city manager.

Mayor Myers was the only member to abstain on voting for Mr. Johnson’s dismissal. He also abstained on accepting Mr. Telfair’s resignation.

Because the council earlier had requested Mr. Telfair’s resignation, the city would be required to pay him at least $33,000 in severance when he departs. He indicated that negotiations on his relationship with the city after he leaves are ongoing.