A song and a prayer 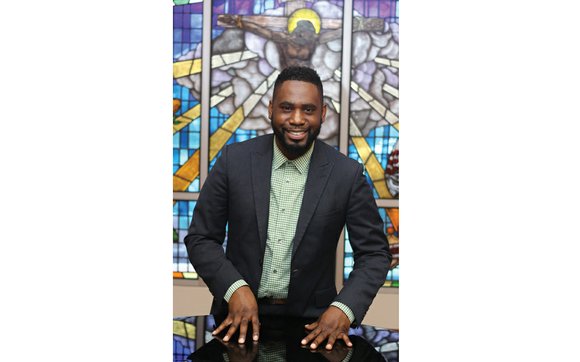 James Johnson Jr., minister of music at Cedar Street Baptist Church of God, is launching the “Agree” campaign a year after being diagnosed with multiple sclerosis. Photo by Sandra Sellars

One year after he was diagnosed with multiple sclerosis, James Johnson Jr., the minister of music at Cedar Street Baptist Church of God in the East End, is releasing a song and initiating a national prayer campaign.

Both are called “Agree.”

The 32-year-old Varina resident, husband, father of two and 2015 Stellar Award nominee told the Free Press both ventures are about how prayer has helped him and can help others to agree to expect a miracle when they are going through tough times.

The award-winning songwriter, producer and artist said “Agree” is based on the promise by Jesus in Matthew18:19 in the Bible: “Again, truly I tell you that if two of you on Earth agree about anything they ask for, it will be done for them by my Father in heaven.”

He said the “Agree” campaign will enlist prayer partners to fill people’s requests.

Mr. Johnson talked with the Free Press on Monday, the one-year anniversary of his MS diagnosis, about the connection between prayer and healing. He said he was inspired to write the song in August. That’s when he saw “how courageously” his cousin, Taleshia Chandler, wife of Cedar Street Pastor Anthony Chandler, was battling breast cancer. She continued to fight even as the cancer metastasized to her bones and liver, he said.

“It was like an instant conviction on me,” Mr. Johnson explained. “I had been so devastated through last spring and summer after learning I had MS. I couldn’t wrap my head around it. It was like self-pity.

Mr. Johnson, who directs four choirs at Cedar Street and accompanies them on the organ or piano, said he felt “angry.”

“I think you feel like, sometimes, when you serve in church and minister to others that you are immune to some of the things that others face,” he said. “Now, I was the one being ministered to by others.”

He said after much soul searching and watching his cousin’s determined response to her cancer fight, he realized, “what she was going through was so much more severe.”

“It made me realize, with God’s help, I can handle this and that I had to pick up the bricks around me and move forward.”

He said he spoke with Dr. Chandler and the two agreed to pray and agree for a miracle in both circumstances.

In a Feb. 8 post on the church Facebook page, Dr. Chandler talked about his wife’s illness: “Today, the oncologist who’s been treating her for cancer since August 2015 told us that she has had an OVERWHELMINGLY positive response to chemotherapy. His exact words “this was the response we were hoping for!”

“We are grateful for all that the Lord has done and we will continue to agree for her complete and total healing,” Mr. Johnson said Monday.

As for his own health, Mr. Johnson said he was diagnosed with the most common form of MS known as relapsing-remitting multiple sclerosis.

MS is an autoimmune disease that causes inflammation of the insulating membranes surrounding nerves within the central nervous system. Symptoms range from numbness and tingling to blindness and paralysis.