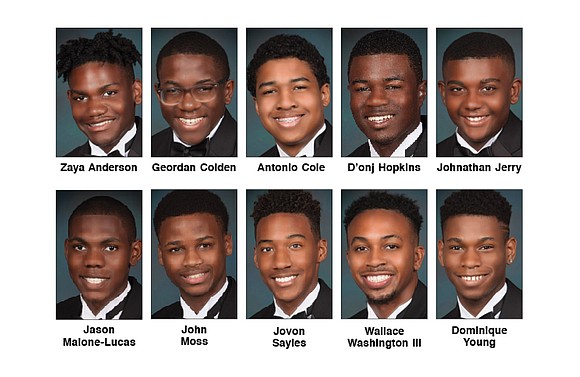 Ten young men were presented at the 22nd Annual PROC Beautillion on Saturday, Nov. 19, at the Greater Richmond Convention Center.

This year’s theme: “Our Time to Lead.”

Since 1995, the Pi Rho Omega Chapter of Alpha Kappa Alpha Sorority’s fundraising arm, Professionals Reaching Out to the Community Foundation, has been preparing young men for future success.

“When we got started in 1995, there was no one in the region who was doing a structured beautillion for young men,” says Brenda J. Foster, co-chair of the Beautillion, a black-tie affair.

“We do feel strongly that the young men are getting a lot from the program,” she said. Many of the participants during the last 22 years have completed college and now have professional careers, she said.

Beautillion participants are high school juniors and seniors. To participate, they must be recommended by a teacher or school administrator and a community representative.

Participants completed personal growth workshops, including “Understanding Your Pathway to Manhood” and “Tied to Greatness.”

They also participated in The Infinite Scholars’ program sponsored by the Richmond Alumnae Chapter of Delta Sigma Theta Sorority.

This year’s program culminated with the formal 2016 Beautillion, where Johnathan Anwar Jerry was crowned the king Saturday night. The first runner-up was John Alexander Moss. Both received awards of educational scholarships.

Geordan Isaiah Colden, who excelled academically during the eight-month program, was awarded a book scholarship.