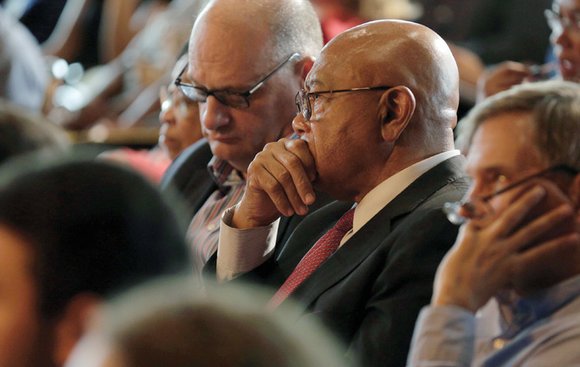 Joe Stewart, center, listens intently as Georgetown University lays out its plans to deal with its links to slavery. His forebears were among the enslaved people the Jesuit-run university sold in 1838 to pay off debts. Joshua Roberts/Reuters

Georgetown University apologized for its historical links to slavery and said last week it would give an admissions edge to descendants of slaves whose sale in the 19th century helped pay off the school’s debts.

The Washington-based university, founded by the Roman Catholic Jesuit order in 1789, will create an institute to study the history of slavery at the school. It also will rename two buildings that honored university presidents who oversaw the 1838 sale of 272 enslaved people who had worked on church-affiliated plantations in Maryland.

“This original evil that shaped the early years of the republic was present here,” Georgetown President John DeGioia told an audience Sept. 1 that included descendants of the enslaved.

The university will hold a Mass of reconciliation “in which we will seek forgiveness for our participation in the institution of slavery, specifically for the sale of 272 children, women and men who we should regard as members of our community.”

The 1838 sale of people brought $115,000, or roughly $3.3 million in today’s dollars, to pay off debts. The 272 enslaved were sent from Jesuit plantations in Maryland to Louisiana, “where they labored under dreadful conditions,” and families were broken up, according to a 104-page report Dr. DeGioia received from a working group he convened a year ago.

The steps, as outlined in the report’s recommendations, go further than those taken by other universities that are confronting their past association with slavery, including Harvard, Brown, Princeton and the University of North Carolina.

But some criticized as inadequate the decision to give the descendants of the enslaved the same admissions preference as the children of faculty, staff and alumni.

“We remain hopeful that we can forge a relationship with Georgetown that will lead to ‘real’ atonement,” Karran Harper Royal, an organizer of a group of descendants, stated in an email.

She added that the school should have offered scholarships to the enslaved people’s descendants and included them on the panel that made the recommendations.

Ms. Royal was among a group of descendants who said they have been left out of the process and “rushed” to the event after not receiving invitations. They rose from their seats and joined President DeGioia at the front of the university’s historic Gaston Hall last week.

Polite but firm, Joe Stewart said he objected to an earlier comment by the Rev. David Collins, chairperson of the university’s working group on the issue, that the faces of the slaves were invisible and would have to be imagined.

Standing alongside him, Ms. Royal then read a joint declaration on behalf of more than 300 descendants, who are located in Louisiana, Maryland and elsewhere.

Mr. Stewart thanked Dr. DeGioia and his team for their efforts. But he continued: “Our attitude is that all of this evolved from the pain and suffering of the 272 people we talked about and we are those faces and our attitude is: Nothing about us without us.