Athletes of all ages across nation join in anthem protest 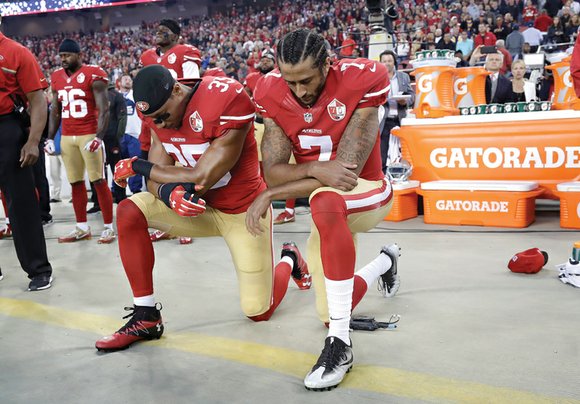 Colin Kaepernick and Eric Reid once again kneeled during the national anthem before the San Francisco 49ers’ season opener Monday night against the Los Angeles Rams in Levi’s Stadium in San Francisco.

Two players on the opposing team, wide receiver Kenny Britt and defensive end Robert Quinn also raised their fists during the opening ceremony — recalling the salute by African-American athletes Tommie Smith and John Carlos during their medal ceremony at the 1968 Olympic Games in Mexico City.

“You have a badge, yes. You are supposed to be protecting us, not murdering us and that is what the issue really is,” Kaepernick said of police after the game, referring to a series of shootings of unarmed African-Americans by white officers that have prompted demonstrations across the country.

Denver Broncos linebacker Brandon Marshall says he’ll kneel again during the national anthem even though he lost a second endorsement deal for joining Kaepernick’s protest of social injustice after kneeling Sept. 8 before the Broncos’ win against the Carolina Panthers.

Several other players around the league took part in similar protests on the NFL’s opening weekend.

Pro Bowl defensive lineman Jurrell Casey, cornerback Jason McCourty and linebacker Wesley Woodyard, who play for the Tennessee Titans, all had hands over their hearts during the anthem before Sunday’s season opener against the Minnesota Vikings in Nashville.

The three Tennessee Titans said they raised their right fists in the air after the national anthem ended to honor the victims and heroes of 9/11 and to bring attention to the ongoing unequal treatment of African-Americans and other minorities.

Kaepernick’s gesture to kneel for the national anthem was repeated by high school players across the country before games last Friday, including several high school games in Virginia.

Several players at Maury High School in Norfolk took a knee behind the end zone when the anthem was played during their game against Grassfield High School on Sept. 9.

Others stood at attention, as did the coaches.

After the game, Maury Coach Chris Fraser told The Virginian-Pilot newspaper, “Our school system has said, we’re of the belief, we let our guys do what they believe in.”

“We didn’t make an issue of it,” he continued. “And if they believe in a cause, that’s fine. I stand behind what they believe in, but I’m going to do what I believe in.”

The protest has angered some fans and school administrators across the nation, who see it as disrespectful to the flag, the military and the nation.

While military personnel unfurled a giant American flag over the field Monday night in San Francisco, a number of NFL fans shouted at Kaepernick, “Why don’t you stand up?”

according to an ESPN commentator.

But the protesting players have been seen as allies of the Black Lives Matter Movement, which grew in response to the police shootings. About two-thirds of NFL players are African-American.

“One injustice against one American ... is an injustice against all Americans. We should all get behind that,” said Daryl Graves, 52, a fan who was in the stands during the 49ers game. “Change doesn’t happen without confrontation.”

Even President Obama has weighed in, saying Kaepernick was exercising a constitutional right and provoking conversation “around some topics that need to be talked about.”

Fans are looking toward the NFL’s Week 13, Dec. 1 through 4, when the NFL is planning to relent on its notoriously strict uniform policy this season to allow players to highlight worthy causes.

Players must have the charity or cause approved by the league prior to Week 13, as

the league still will determine the legitimacy of the cause. The players also must auction off the cleats after use and donate 100 percent of their proceeds to that charity or cause.