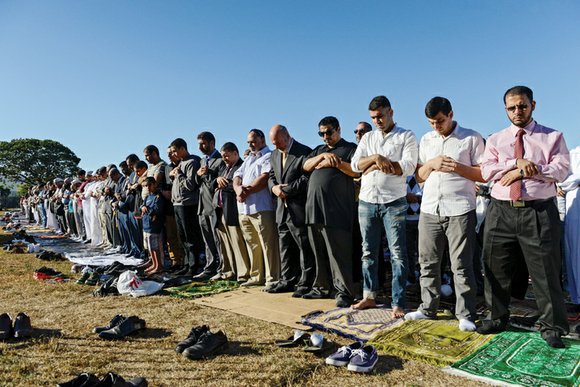 Muslims around the world — and in Metro Richmond — are celebrating the holiday Eid al-Adha this week. It is one of the two most important festivals of the Islamic calendar. It began Monday and lasts until Thursday, Sept. 15.

The holiday marks the willingness of Ibrahim, or Abraham, to sacrifice his son on God’s command, and Muslims mark the holiday by slaughtering animals such as sheep and goats. The meat is shared among family and friends and also donated to the poor.

The Islamic Center of Richmond on Mayland Drive is hosting its own food drive for the poor.

Faithful across continents are observing the festival, which comes as the annual Hajj pilgrimage to Mecca in Saudi Arabia draws to a close.

For weeks, some U.S.

Women offer prayers for Eid al-Adha on Monday at a mosque in Ahmadabad, India. Muslims worldwide are celebrating the holiday, also known as the “Feast of Sacrifice” commemorating the willingness of the prophet Ibrahim to sacrifice his son for God.

Islamic leaders worried that the Eid al-Adha holiday would fall on Sept. 11, raising the possibility that some non-Muslims would misinterpret celebrations occurring on the solemn 15th anniversary of nation’s terrorists attacks of 2001.

The Council on American-Islamic Relations, or CAIR, and other Muslim groups repeatedly have expressed concern about a surge in hate crimes against Muslims in the wake of attacks by extremists in San Bernardino, Ca., Orlando, Fla., and elsewhere.

One percent of Virginia’s adult population practices the Islamic faith.