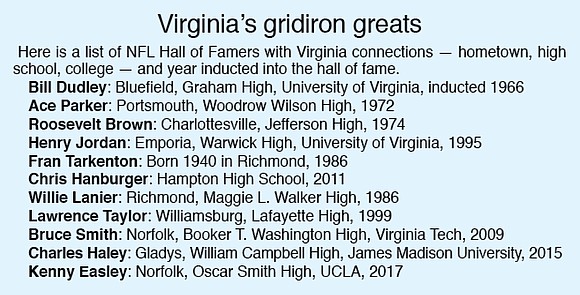 Limited to just seven seasons (81-87) due to a kidney ailment, Easley was a five-time All-Pro, NFL Defensive Player of the Year in 1984 and selected to the NFL’s 1980s All-Decade team.

Known as “The Enforcer,” he was a devastating tackler from his strong safety position, as well as a bruising pass defender for the Seattle Seahawks.

Spending his entire pro career in Seattle, he collected 32 career interceptions, including 10 in 1984. He returned his picks for 538 yards and three touchdowns.

Easley, now 58 and residing in Chesapeake with his wife, Gail, became the latest Virginian to be named to the NFL Hall of Fame with his induction Saturday, Aug. 5, in Canton, Ohio.

He went on to become a three-time consensus All-American at UCLA, earning a degree in political science, and was Seattle’s first round draft pick and the fourth player taken overall in 1981.

Easley was first nominated for the Hall of Fame in 1997 and had to wait 20 years for induction. He was selected into the hall by the Senior Committee, which takes over voting once an athlete has been retired 25 years.