Sheriff sanctioned over loss of videotape in jail inmate’s death 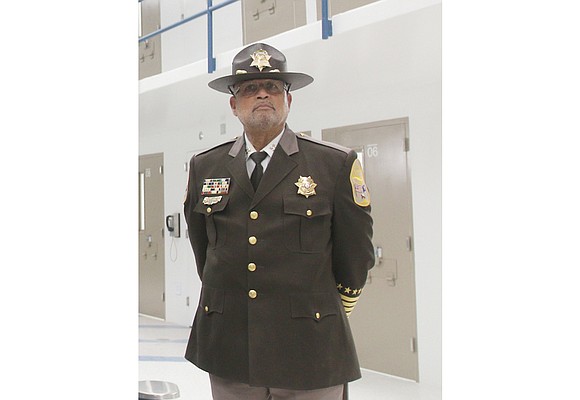 Richmond Sheriff C.T. Woody Jr. describes the 500 video cameras that record inside the Richmond Justice Center “as a sort of a truth serum,” a way to show “what really happened” when inmates complain or there is a disagreement about events.

Those words have come back to haunt him as he seeks to defend himself and the jail against a $10 million wrongful death lawsuit stemming from the death of Erin Jenkins, 29, just five days after the new jail opened in 2014.

Ms. Jenkins, who was awaiting trial on gun and drug charges, became ill, was found unresponsive hours later and died at a nearby hospital, court records show.

Her mother, Virginia Paige Jenkins, has sued for wrongful death on behalf of her daughter’s estate, claiming that appropriate care would have saved her daughter’s life.

Key evidence — the video from cameras that recorded Ms. Jenkins’ final hours in the jail — was not preserved, eliminating the best view of the treatment she received.

Sheriff Woody and his staff have admitted in court that the video was left in the cameras and recorded over after 30 days, thus lost forever — even though Ms. Jenkins’ legal team requested the video within 25 days of her death as they prepared to file suit.

Failure to preserve that video has led the federal judge presiding over the case to hit Sheriff Woody with costly sanctions that are a blow to him and his defense.

U.S. District Judge M. Hannah Lauck stated in a written decision that when the case goes to trial, the loss of the video would be disclosed to the jury, which would be allowed to use the information in determining the verdict and the amount of damages.

Judge Lauck also barred the sheriff and his co-defendant, retired Deputy Elizabeth Beaver, from testifying or arguing the video would have supported their version that Ms. Jenkins received appropriate care.

The judge did not find that Sheriff Woody acted deliberately or intentionally to get rid of the video, which could have led to a judgment for the plaintiff without a trial.

Still, the judge wrote that the loss of the video has caused “grave prejudice” to the plaintiff. And the missing video appears to have led Judge Lauck to reject Sheriff Woody’s arguments for dismissal of most of the claims brought against him and to allow the jury to consider punitive damages.

That includes paying for expenses the legal team incurred to learn about and obtain jail audiotapes related to Ms. Jenkins’ time in jail, and which Sheriff Woody waited six months to turn over, according to court records.

The total amount that the sheriff will be required to pay is to be determined at a hearing the judge will hold later, although the money will not come out of the sheriff’s pocket. He is represented by the state, and taxpayers are expected to be on the hook for all of the expenses related to the defense of Sheriff Woody and Ms. Beaver.

The case was set to begin Monday in Richmond federal court, but Judge Lauck postponed the start to consider whether to impose further sanctions on Sheriff Woody because of additional evidence the defense presented at the last minute.

The case involved other defendants whose cases have settled or been dropped. For example, the jail’s medical provider, originally a defendant, paid $275,000 to settle, which Judge Lauck approved in December, according to court records.

During her stay at the jail, Ms. Jenkins was considered mentally ill because of her actions and because she hallucinated, court records show.

However, the medical examiner found that she died of a perforated duodenal ulcer that went undiagnosed by the jail’s medical staff.

The sheriff’s internal investigation concluded that Ms. Jenkins died from natural causes and that there were no signs of foul play or that the jail staff violated policy.

But that determination may not stick. The decision on what happened and who is to blame will be up to the jury when the case does go to trial.  The main issue the jury will have to settle is whether there was deliberate medical neglect before Ms. Jenkins was found in her cell, as a jail report put it: “Incoherent, incontinent and not breathing.”