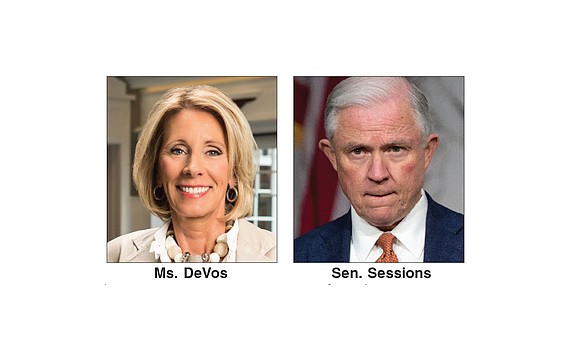 Two of President Trump’s controversial picks for his cabinet have been confirmed by the Senate and are ready to take office.

Betsy DeVos, his nominee for secretary of education, was narrowly confirmed on Tuesday when Vice President Mike Pence, the Senate’s presiding officer, broke a 50-50 tie to give her the job, the first time a cabinet nominee has been approved on such a vote.

And Alabama Sen. Jeff Sessions was confirmed as U.S. attorney general Wednesday evening in a 52-47 vote despite efforts by most Senate Democrats to derail his nomination.

Democrats are concerned Ms. DeVos, a billionaire advocate of charter schools, would seek to use her position to promote them and undercut public schools, long the anchor of the U.S. education system.

Teachers unions, a major constituency for the Democratic Party, roundly opposed Ms. DeVos for the leadership post of an agency that sets education policy for younger children and universities and also administers a $1 trillion college financial aid program.

During the debate over Sen. Sessions’ nomination, Republican Majority Leader Mitch McConnell used his position to silence Massachusetts Democratic Sen. Elizabeth Warren when she began reading a 30- year-old letter that Coretta Scott King wrote criticizing Sen. Sessions’ track record on civil rights when he was up for a federal judgeship. He ultimately was rejected for the judgeship.

Sen. McConnell interrupted Sen. Warren’s reading and ordered her silenced for using the letter to attack Sen. Sessions, citing Senate Rule 19, which states, in part, that if a senator “impugns the motives or integrity of any senator,” he or she “may be called to order.”

A senate vote of 49-43 along party lines sustained Sen. McConnell’s decision to silence Sen. Warren, who was ordered to be seated and to stop speaking. She immediately requested permission to leave the Senate floor and then stood outside the Senate chambers to record herself reading the letter in its entirety.

The video went viral on Facebook, receiving more than 8.8 million views by early Wednesday evening. News outlets and Sen. Warren’s supporters also posted links to the letter in its entirety.

In her 1986 letter to the Judiciary Committee chairman, then South Carolina Sen. Strom Thurmond, Mrs. King, widow of slain civil rights leader Dr. Martin Luther King Jr., expressed her “sincere opposition to the confirmation [of Mr. Sessions] as a federal district court judge for the Southern District of Alabama.”

In her nine-page statement, Mrs. King wrote that “Mr. Sessions has used the awesome power of his office to chill the free exercise of the vote by black citizens in the district he now seeks to serve as a federal judge.”

Sen. McConnell drew criticism for being sexist, because he did not attempt to shut down Sens. Tom Udall of New Mexico, Sherrod Brown of Ohio and Bernie Sanders of Vermont when they read from Mrs. King’s letter after Sen. Warren did.