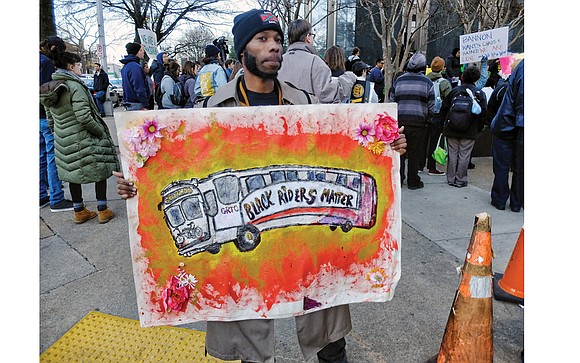 Despite an outpouring of concern that regular bus riders, largely African-Americans, are being ignored and overlooked, Richmond City Council voted 9-0 Monday to endorse a proposed overhaul of current GRTC routes aimed at speeding up regular service and connecting riders with the east-west Pulse bus rapid transit system now under construction.

With the state poised to give the city $3.8 million to aid GRTC to implement the route overhaul next fall when the Pulse is to go into service, the council rejected the call from advocates to delay a vote on the resolution supporting the RVA Transit Network Plan that was rolled out last month.

The draft of the plan calls for having buses running every 15 minutes on a few main routes, with other routes having 30- or 60-minute service, depending on ridership and demand. The plan calls for consolidating some current routes, including four in Church Hill, and for sharp cuts in the number of stops where passengers can catch a bus. The plan is designed to help speed up runs.

Before the vote, City Council members got an earful from people worried that regular passengers would see little improvement in service or access to jobs, belying city pledges to do more to address poverty and the dearth of job opportunities.

“The draft Transit Plan provides for zero expansion of the existing network and fails to provide more access to job opportunities,” said Omari Al-Qadaffi, a founder and organizer with Leaders of the New South.

He asserted that the consultants who drafted the plan justified it with a poor quality survey and phony statistics that didn’t reflect the demographics of the ridership or the city. The resulting plan, he said, fails to address the concerns of current bus riders who he said do not support it.

Arthur Burton, founder and leader of the nonprofit Kinfolk Community Center that operates in Mosby Court, told the council that drafters simply ignored concerns. He said he and others offered what they considered constructive proposals as the draft plan was being developed, “and none of those concerns were addressed when the plan was rolled out.”

Council members, though, sought to reassure speakers and those watching the meeting on TV that such concerns are being heard and could and would be addressed before the final plan is issued next month.

City Council Vice President Cynthia Newbille, 7th District, promised that she would ride buses during the next few weeks to gather more information and hear rider concerns. Other council members will be holding community meetings to gain feedback.

Meanwhile, Amy Inman, a city planner who is overseeing the transit plan’s development with consultants, sought to counter the impression that concerns were being ignored.

She told the council that “tweaks” already have been made to the plan to restore service and stops near Armstrong High School and in the Oakwood section of Church Hill after hearing from riders like Dora Callahan, who has relied on bus service for 45 years. She and others told the council about the hardships the loss of bus stops in those areas would cause.

Ms. Inman said changes will be made to ensure riders can access the proposed grocery store that is planned for a site at Nine Mile Road and 25th Street.

The result would be more coverage, Ms. Inman said, but such changes would mean GRTC would have to offer 30-minute service instead of the 15-minute service that was initially proposed.

Council has only limited authority, having granted GRTC full authority to change routes and bus stops. But the governing body’s support is regarded as critical in enabling the RVA Transit Network plan to be adequately funded.

Planning for change began during former Mayor Dwight C. Jones’ tenure and continues to have the backing of Mayor Levar M. Stoney.

The council was repeatedly told during the public comment period the draft plan would not uplift the 20,000 residents who rely on transit and that more time needed to be spent in developing the plan for those whose fares are the financial backbone of the system.

“What is the rush?” asked Lynetta Thompson, former president of the Richmond Branch NAACP, urging the council to do more to make sure that low-income neighborhoods in Church Hill and South Side are well served.

The NAACP branch, joined by at least 12 other civic groups in the RVA Coalition for Smart Transit, already has filed a discrimination complaint with the Federal Transit Administration, which is paying the lion’s share of the cost of Pulse, charging that the poorest areas of the city are being left out of service.

Advocates for delay also lambasted Mayor Stoney for doing little with this plan to support his call for “one city.” They also criticized Council President Chris A. Hilbert for promising to address poverty and then promoting a bus plan would have little impact on that issue.

Speakers, including Osita Iroegbu, urged city officials to drop the pretense that they want to address the poverty that afflicts 25 percent of city residents.

That hit home with President Hilbert, who pledged to “double down” in ensuring the issue is better addressed as the plan undergoes further refinement.