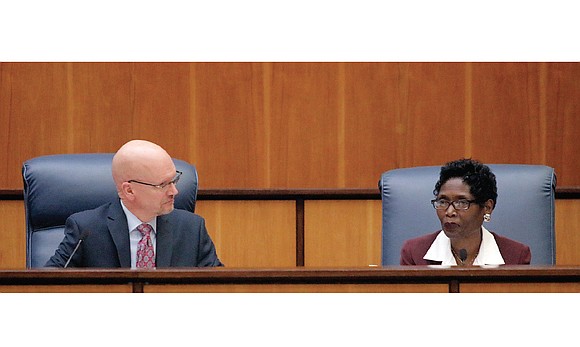 Chris A. Hilbert challenged his Richmond City Council colleagues to do more to tackle poverty and racism in Richmond after he was elected the new council president on Tuesday.

Mr. Hilbert, who represents the city’s 3rd District, spoke after the council members — including four new people — were sworn in, voted for officers and approved committee assignments, which included a surprising snub to one veteran, 5th District Councilman Parker C. Agelasto.

In accepting the council’s top leadership post, Mr. Hilbert sought to lay out priorities that he believes the council should be concerned with during the next four years.

He urged council members to “honestly address the problem of the disparity of wealth and opportunity for the 1 in 4 residents of Richmond that live in poverty.”

Mr. Hilbert, who has represented the 3rd District for 12 years, also called on his colleagues to enable the city “to truly face the uglier parts of our history and the racism that started this disparity and recognize and admit these issues are apparent to this very day.”

Just as importantly, he said that council must do more to deal with the spike in crime, to improve service delivery and to address, along with new Mayor Levar Stoney and the School Board, the shortcomings of the city’s public schools.

“The choice is ours,” he said. “The question before us is whether we will use our liberty to create justice.

“I say, ‘Yes, we will,’ ” he continued. “And I challenge every man and every woman in our city to take up this worthy cause. For when we do this, we can state with one voice that we all believe in a place called Richmond.”

In a statement, Mr. Agelasto suggested the decision to strip him of the leadership post and leave him as the only veteran without a chairmanship represented punishment for his efforts in the previous four years “to bring greater transparency to council operations and greater accountability over how taxpayer monies are spent.”

Mr. Agelasto indicated that his efforts were “not greeted with open arms by some on the council who are wedded to past actions that too often led to spending abuses and fixation on shiny projects at the expense of funding for schools, public safety and basic city services.”

He said Mr. Hilbert’s decision “is, therefore, not surprising; it is disappointing, nonetheless.”

Mr. Hilbert said later that Mr. Agelasto was far from the only member of council who sought to ride herd on city spending. He said committee assignments were made after discussions with current and new council members, and that he did his best to accommodate requests, including expanding the Finance Committee to five members, including Mr. Agelasto and new members Kimberly B. Gray, 2nd District, and Kristen N. Larson, 4th District.