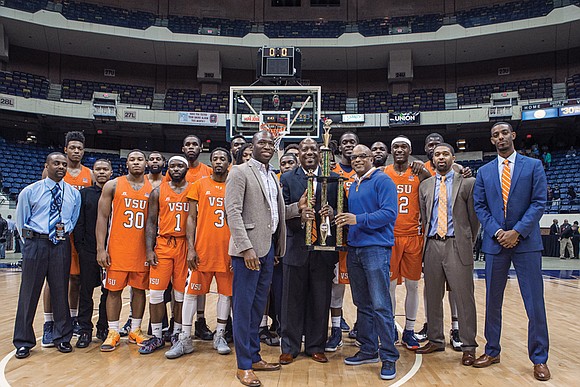 It didn’t take him long to turn up his volume loud and clear in the Trojans’ 74-59 victory over Virginia Union University at the Richmond Coliseum in Downtown.

“I just try and fit in wherever I can, just to help out,” Brown said after netting 16 points — 10 in the first half — on six for six shooting from the field, including two for two from beyond the arc.

And all that in just 15 minutes of floor time.

Coach Blow began recruiting Brown when he was a student at Louisburg College, a private, two-year college in North Carolina.

It’s a good thing. Brown’s 3-ball swish at 12:02 in the second half provided VSU with a commanding 50-36 lead, and the Trojans were en route to a seventh straight win.

Avenging a loss to VUU in last year’s Freedom Classic, the Trojans are now 13-3 overall and 5-1 in the CIAA.

Brown might be nicknamed “Been Around Brown.” Here’s his itinerary:

From Hampton, Brown helped Menchville High School to the Peninsula District title in 2012. From there, he spent a year at Fork Union Military Academy in Virginia then a season at Louisburg College. He added one semester at North Carolina A&T State University before sitting out all of last season and now playing for VSU.

The Freedom Classic was his orange and blue coming out party.

“It was a big game for me playing here” in the Coliseum, he said. “It’s a big rivalry and I was fired up for it.”

Brown leads VSU in 3-point accuracy (45 percent), but insists it’s “only a coincidence” his name — Trey — reflects his long-distance touch.

It’s not often you see a 5-foot-10 man like Kevin Williams soar so high, especially with a man on him. He bounds off the wood like the floor is a trampoline.

The assertive 5-foot-11 Wright, a junior from Raleigh sporting a shaved head, beard and trademark headband, was unflappable as VUU turned up the defensive heat in late going.

VSU was solid defensively against VUU’s Ray Anderson. The CIAA’s leading scorer finished with 14 points, but had only five points at intermission, with the Trojans up 33-23.

Brown was among the Trojans taking a turn checking the quicksilver Anderson, who began the night averaging 18.5 points.