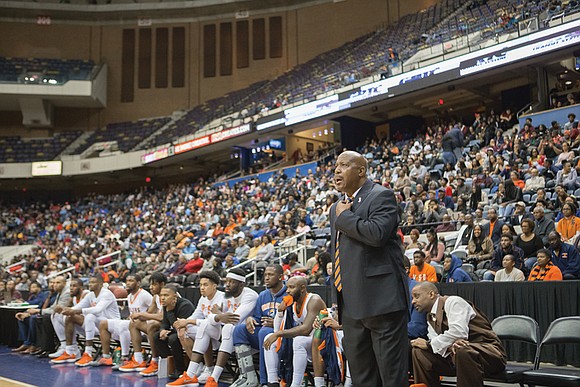 Trey Brown is a major reason why Virginia State University is enjoying perhaps its best basketball season in program history. 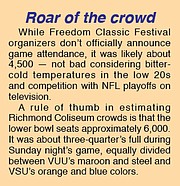 The senior’s talents were fully displayed Sunday, Jan. 14, during VSU’s 82-72 victory over Virginia Union University in the 23rd Freedom Classic Festival at the Richmond Coliseum.

“I love big venues,” Brown said after the team’s big win. “I wish we could play here more often.”

A 6-foot-3 guard from Hampton who transferred to VSU from North Carolina A&T State University, Brown did everything for the Trojans except play the cymbals during the marching band halftime show.

Consider Brown’s checklist of achievements in helping VSU improve to 15-1 overall and 5-1 in the CIAA:

Free throws: He was six for six.

Drama: After VUU pulled to 69-62 at 1:31, Brown snuffed the Panthers’ rally with a 3-point swisher. Moments later, he stole a pass to seal the deal.

This marks the second year in row Brown rose to the occasion in the Freedom Classic, an event honoring the legacy of Dr. Martin Luther King Jr.

Brown, who averages 11 points and six rebounds, has stepped up since Brandon Holley, VSU’s top long-range shooter, was injured.

“Until Brandon comes back, I’ll be getting more shots,” said Brown. Holley was 39-for-79 (49 percent) from the distance prior to being sidelined.

Polls: As of Jan. 9, VSU was ranked 13th nationally in the NCAA Division II. The Trojans have won eight straight games since a Dec. 14 loss at St. Augustine’s University. Right now, at least, VSU would seem a solid bet for an NCAA at-large tournament slot should the team fail to win an automatic bid from the CIAA Tournament in Charlotte, N.C.

Ball-handling: The smallish backcourt combo of Waymond Wright and Philip Owens provide a cool demeanor against a pressure defense.

Future: A forceful up-and-comer is 6-foot-7 Andrew Corum. The sophomore from Leesburg tallied nine points and eight rebounds against VUU.

VUU, in falling to a 9-9 record overall and 4-2 in the CIAA, deserves much credit for not folding following a dismal first half. 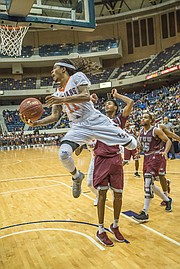 Virginia State University’s Cyonte Melvin takes it to the hoop at the Freedom Classic Festival game Sunday against rival Virginia Union University at the Richmond Coliseum.

The Panthers trailed by as much as 47-21 before dialing up the heat with a frenetic full-floor defense and relentlessly attacking the basket.

VUU wound up hitting 31 of 42 foul shots, all but eight of those attempts following intermission. Three Trojans fouled out and two more had four fouls.

The Virginia Union University Rah Rahs work to rally Panthers fans with cheers from the sidelines.

The rivalry rematch will be Wednesday, Feb. 7, when VUU travels to Ettrick.

“We look forward to going down to Virginia State and playing (for the first time) in the VSU Multi-Purpose Center,” said Coach Butler.

Only one problem: Old nemesis Trey Brown will be waiting.